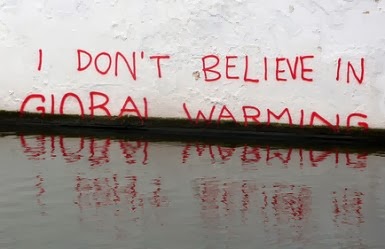 Once in a hundred year floods.   Once in five hundred year drought.  Once a century this or that.  Now that we're beginning to routinely calibrate severe weather events on dynastic scales, climate change denialism.

Writing in The Observer, Henry Porter says it's showtime for the denialists.   If they have a coherent theory to support skepticism, it's time they held a convention and laid out their evidence for all to see and refute.  If not, it's time for them to step aside and let the grown ups deal with climate change.

They are always the sniping antagonists, rarely, if ever, standing up to say: we believe in the following facts and here is our research. It is a risk-free strategy – at least for the moment – that comes almost exclusively from the political right and is, as often as not, incentivised by simple capitalist gain. Hearing Lord Lawson argue with the impeccably reasonable climate scientist Sir Brian Hoskins on the BBC Today programme last week, I finally boiled over. It is surely now time for the deniers to make their case and hold an international conference, where they set out their scientific stall, which, while stating that the climate is fundamentally chaotic, provides positive, underlying evidence that man's activity has had no impact on sea and atmosphere temperatures, diminishing icecaps and glaciers, rising sea levels and so on.

Until such a conference is held and people such as Lawson, Lord Monckton, Christopher Booker, Samuel Brittan and Viscount Ridley – names that begin to give you some idea of the demographic – are required to provide the proof of their case, rather than feeding off that of their opponents, they should be treated with mild disdain. I don't say deniers should be banned from media outlets, as the website Reddit has attempted to do, but just that there should be agreement that they must now qualify, with argument and facts, for the balanced coverage they receive in such places as the BBC.

At the outset I emphasized "coherent" theory which is something the denialists have utterly failed to achieve.  Instead, the denialist community, when it convenes in supposed conferences, is a cornucopia of radical notions that are generally irreconcilable, inconsistent and contradictory, yet always equally embraced.  Now, when you've got twelve people in a room, each with his own reality, you're in an asylum.

The biggest deniers are the ones whose stock portfolios are bulging with names like Halliburton, Royal Dutch Shell, Cenovus, and TransCanada Pipeline; the Suits and parasitic rich who run the shop with their "I've got mine, so fuck you" world view. And the soporific masses, lulled into apathy and shortsightedness by workaday worries and 24/7 e-Talk infotainment news from Bay Street and Wall Street keep themselves uninformed and undereducated out of a sheer, nihilistic weariness of it all Choosing paper over plastic or buying a Prius instead of a Ford seems to be all of the environmental consciousness or effort they seem to be ready to muster.

I think that that's part of the right's strategy: blare nonsense loud enough and often enough that it grinds down people's tolerance for the issue at all. And it certainly doesn't help when the media automatically lends every argument a false, knee-jerk equivalency simply by virtue of the fact that there's a Oil Patch spokesman, a Harper flack, or some tinfoil hat type out there who despises Al Gore or Jim Hansen, just so they can talk over each other in some 35 second "debate".

It's much the same with the creationism/intelligent design crowd (and the two are becoming increasingly closely linked in some religionist circles). They'll cherry pick often unrelated square peg facts out of context and then bash them into the round holes of hopelessly bastardized arguments and call it scientifically supported research, which they then feed to the media and dim-witted, right wing, policy making polls who believe their god will never allow another Noahic Flood because god's "been there, done that".

To be honest, I feel we're perched on the edge of a precipice, and we will go over...

I do know how you feel, Neil.

I heard one of the Masters of Capitalism explain his group's intransigence. He said that most of his colleagues realize, on a personal level, that climate change is real and a serious threat to their grandkids but, when they get to the office, they're bound to pursue the path of maximized returns for shareholders which, for now, means acting in denial of climate change.

They can't surmount the contradiction, the overwhelming cognitive dissonance, so they fall back on the corporate play book.

Now, if we started hanging CEO's randomly from light posts maybe there'd be a bit of enlightenment...

its tragic that the captains of industry dont start being rolemodels. Perhaps if the offending industries had to pay for some of the infrastructure that is being destroyed, perhaps that would fix the issue.
make it part of the bottom line an cut into their profits.

if they think the climate isn't changing they haven't been outside lately. The cause of the climate change maybe up for debate in some views. However, given the number of floods, droughts, hurricanes, etc. governments need to be prepared. Even if humans were not changing the climate, we need to look after what we still have around. For climate change deniers, who think humans aren't causing it, they might want to look back at history and see that climate has changed over the eons. Humans or no humans. So we need to be prepared for climate change whatever the cause. That includes ensuring we don't pollute the land, earth and air. We need to restructure how we manufacture, deal with nature and build cities.

we know from history/geology cities have come and gone due to flooding and drought. With the world's high population we need to take care. We need to look if humans even have a very minimal impact, it could be catastrophic.

Having a look at London, California, and what happened in New York, they can believe what they want, but the climate is changing and it going to cost us a very large amount of money.,

Two things are happening that industry won't be able to avoid. One is cost for climate change losses and escalating insurance premiums. The second is disclosure. Corporations and, especially investment managers, are going to have to take responsibility for disclosing climate change vulnerabilities. Shareholders and institutional investors are beginning to ask questions about the security of their investments.