When America's Banks Own Everything 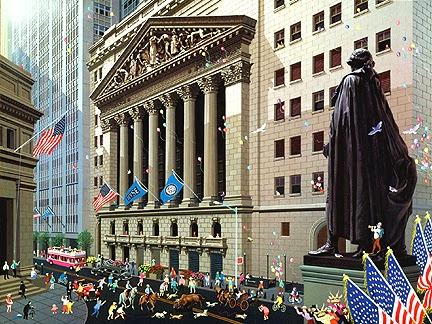 Goldman Sachs, JP Morgan, Morgan Stanley were once known as banks.  Dodgy banks, to be sure,  but still, banks.  Now, with the benefit of virtually interest-free money from the U.S. Fed, they're moving big time into market manipulation, buying up enough  industrial assets and commodities to sway market prices - in their favour and theirs alone.

There may not be a more justifiably frustrated, world class journalist than Rolling Stone's Matt Tiabbi.  No one has done a better job at exposing Wall Street's wicked ways than Tiabbi but, c'mon it's banking.  As soon as Tiabbi serves up the next juicy scandal, someone yells "squirrel" and the public stampedes in the opposite direction.  And so Wall Street bankers go about their business unmolested.   Now Tiabbi is exposing the mega-banks most devious scam yet but is anyone listening?

Today, banks like Morgan Stanley, JPMorgan Chase and Goldman Sachs own oil tankers, run airports and control huge quantities of coal, natural gas, heating oil, electric power and precious metals. They likewise can now be found exerting direct control over the supply of a whole galaxy of raw materials crucial to world industry and to society in general, including everything from food products to metals like zinc, copper, tin, nickel and, most infamously thanks to a recent high-profile scandal, aluminum. And they're doing it not just here but abroad as well: In Denmark, thousands took to the streets in protest in recent weeks, vampire-squid banners in hand, when news came out that Goldman Sachs was about to buy a 19 percent stake in Dong Energy, a national electric provider. The furor inspired mass resignations of ministers from the government's ruling coalition, as the Danish public wondered how an American investment bank could possibly hold so much influence over the state energy grid.

But banks aren't just buying stuff, they're buying whole industrial processes. They're buying oil that's still in the ground, the tankers that move it across the sea, the refineries that turn it into fuel, and the pipelines that bring it to your home. Then, just for kicks, they're also betting on the timing and efficiency of these same industrial processes in the financial markets – buying and selling oil stocks on the stock exchange, oil futures on the futures market, swaps on the swaps market, etc.

Allowing one company to control the supply of crucial physical commodities, and also trade in the financial products that might be related to those markets, is an open invitation to commit mass manipulation. It's something akin to letting casino owners who take book on NFL games during the week also coach all the teams on Sundays.

The situation has opened a Pandora's box of horrifying new corruption possibilities, but it's been hard for the public to notice, since regulators have struggled to put even the slightest dent in Wall Street's older, more familiar scams. In just the past few years we've seen an explosion of scandals – from the multitrillion-dollar Libor saga (major international banks gaming world interest rates), to the more recent foreign-currency-exchange fiasco (many of the same banks suspected of rigging prices in the $5.3-trillion-a-day currency markets), to lesser scandals involving manipulation of interest-rate swaps, and gold and silver prices.

In these new, even scarier kinds of manipulations, banks that own whole chains of physical business interests have been caught rigging prices in those industries. For instance, in just the past two years, fines in excess of $400 million have been levied against both JPMorgan Chase and Barclays for allegedly manipulating the delivery of electricity in several states, including California. In the case of Barclays, which is contesting the fine, regulators claim prices were manipulated to help the bank win financial bets it had made on those same energy markets.

And last summer, The New York Times described how Goldman Sachs was caught systematically delaying the delivery of metals out of a network of warehouses it owned in order to jack up rents and artificially boost prices.
Last year the United Nations Food and Agriculture Organization declared the world to be in a permanent state of food insecurity.  Shortly afterward it emerged that Goldman Sachs' biggest trading desk was for food commodities.  Around the same time the UN FAO reported on impoverished countries hit with food insecurity because market speculation had driven the price of foodstuffs out of reach of consumers and fingers were pointed at - you guessed it - mega banks like Goldman Sachs.

The United Metropolitan Improved Hot Muffin and Crumpet Baking and Punctual Delivery Company.
Every time I hear of a new banking scam, I think of that. A fictitious company invented by the mind of Dickens. Of course, these new scams aren't really new at all. They've been around for ages. These banksters are merely rediscovering them due to the laws and rules prohibiting them from such behavior being struck out.
Judging from history, it could be decades of fights ahead of us to get these rampant institutions back under stable ownership. However, between now and then is a long time of serious instability.

It's hard to guess what lies ahead, Troy. So many efforts are being made to degrade social cohesion that the plebs are being weakened even faster than the oligarchs are ascending. In the U.S., and to a lesser extent, Canada, democracy is becoming transactional, just as it did during the final centuries of the Roman Empire.

Americans were warned about the bank industry and the military, armament, and- I'll add- prison industries, by some very wise men. I've read their speeches. Same with climate-change. Harper welcomes scientists who are willing to jump on board with their mindless mantra of...prosperity for all. Jobs, growth and prosperity, yeah right. And just enough people buy that simplistic, self-serving, trickle-down con, for the cheating, electioneering wizardry to continue.

I was going to say making it worse is that much of the financial trading is basically fraudulent. But when you think about it, any situation where reality is manipulated and real wealth creation blocked for the sake of changing who has abstract claims on that wealth, "fraudulent" is basically what it is. The whole edifice is rotten; it's not that some of them are cheating, it's that what they do is a cheat.