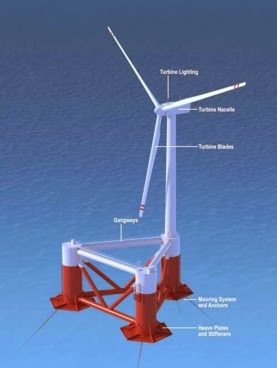 Approval has been given for an offshore wind-turbine demonstration project near Coos Bay, Oregon.  The turbines will float, anchored some 1,400 feet above the sea bed.   They'll be situated some 16-nautical miles offshore.  At first five floating turbines will be used to generate a peak 30-megawatts of electricity.

Europe has a head start in this technology, exploiting the "west coast" advantage for offshore turbine power.  So long as the Earth rotates we can depend on the energy of prevailing westerly winds.  Then again, if the Earth stops rotating, we won't need it for long anyway.

If the European and Oregon demonstration projects achieve their potential, offshore wind farms could become a major source of renewable, clean energy for North America.
Posted by The Mound of Sound at 12:15 PM