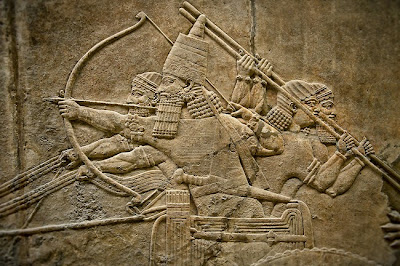 Overpopulation + Drought = Collapse.  Just ask any Assyrian.  Of course they've been gone since the 7th century so that's not very practical.

Historians have long wondered how the Assyrians, the military powerhouse of their region, were taken down by Babylonian forces at Nineveh in 612.   New research shows the Assyrians were already down and on their way out.  The Babylonians just finished the job.

Experts from UC San Diego and Koc University, Istanbul, have discovered that overpopulation and sustained drought caused the empire to collapse, leading the neighbours to move in.


Analysis of the area's weather patterns from paleoclimatic records found that this drought was part of a long period of drought that lasted for several years.
Adam Schneider, from the University of California, said: "As far as we know, ours is the first study to put forward the hypothesis that climate change - specifically drought - helped to destroy the Assyrian Empire."

At the same time, the Assyrian Empire was suffering from overpopulation. Society had grown unsustainably large during the reign of King Sennacherib and the Empire was "fatally weakened".

Within five years, Assyria was ravaged by civil wars. "We're not saying that the Assyrians suddenly starved to death or were forced to wander off into the desert en masse, abandoning their cities," Schneider said. "Rather, we're saying that drought and overpopulation affected the economy and destabilised the political system to a point where the empire couldn't withstand unrest and the onslaught of other peoples."

The researchers said the collapse of the Assyrian Empire is comparable with the current political situation in the Syria and northern Iraq. They also draw parallels with cities like San Diego and Los Angeles, where areas grow too large for their environments.

"The Assyrians can be 'excused' to some extent for focusing on short-term economic or political goals which increased their risk of being negatively impacted by climate change, given their technological capacity and their level of scientific understanding about how the natural world works," the authors wrote.
"We, however, have no such excuses, and we also possess the additional benefit of hindsight, which allows us to piece together from the past what can go wrong if we choose not to enact policies that promote longer-term sustainability."

We should learn from this, but we won't. Too many people are in denial.

Mankind has amassed a remarkably rich history of civilizational collapse. Today the situation is considerably different. Thanks to globalization we have an essentially global civilization and thanks to the technology that has driven globalization we're heading ever more powerfully toward our collective ruin.

We have transformed past experiences of collapse into a potential extinction event. Amazing, isn't it?

Drought appears to have played a major role in the Classic Maya collapse:


Professors Harvey Weiss of Yale University and Raymond S. Bradley of the University of Massachusetts have written, "Many lines of evidence now point to climate forcing as the primary agent in repeated social collapse."

That's very true, Anon. It adds credence to the theory that intelligent life, given just a bit of time, is self-extinguishing.