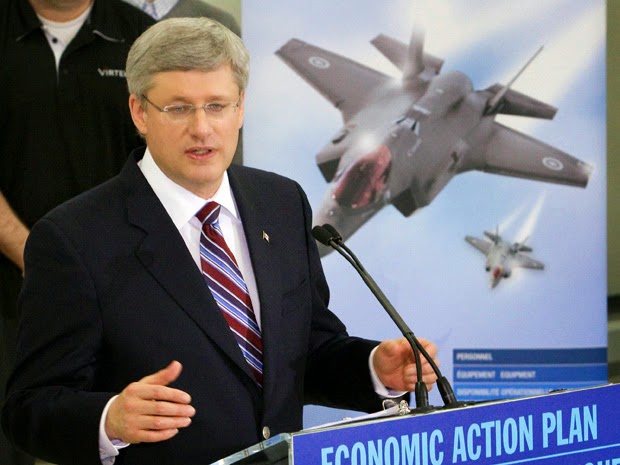 Word has leaked out of the Pentagon that Stephen Harper has ordered four F-35s for delivery in 2017.

No one would order four warplanes like the F-35.  Harper would have ordered a lot more.  Think in multiples of 12.  24 or 36 at least.  It's those sort of numbers that would be the minimum necessary for an operational F-35 unit.

The operating and service costs of anything less, such as just four, would be prohibitive.  In other words, if you've ordered four, you're ordering more.

For Harper, the F-35 is the safe bet.  It satisfies the main issue, the political factor.  The F-35 is ultimately a political decision.  It's politically advantageous to buy and politically problematic to reject.  When it comes to this sort of thing, Canada's political and military leadership are all "go along to get along" types.

From a military perspective the bloom is off the rose.  The F-35 sacrificed a lot of capability for a limited, frontal-aspect only stealth masking.  It sacrificed speed, agility, range and payload for supposed invisibility.  It doesn't even have supercruise.

It's still years away from being operational in any meaningful numbers and already the intended adversaries have developed countermeasures and worked up tactics that the Americans acknowledge will defeat the F-35's stealth qualities. There's a reason, a very good reason, that the US Air Force and Navy are pushing hard to expedite a replacement before the F-35 even enters service.

The value of the F-35 and its apparent premature obsolescence  (stillbirth) don't trump the political decision.

.. Its classic Harper & his spokeswanks & PMO et al
.. Lie then Deny..
.. put it all through the Reform/Conservative blender
and serve it up shaken stirred toxic for the electorate

Of course the order will begin filling after the required surplus announcements and election writ.. or better said, contracts etc will be back-dated. Expect nothing but poison from these political and ideological scumbags

I recall when Gordo Campbell won a BC election after promising there were no plans to implement HST and afterward doing just that.

That seems to be part and parcel of neoliberalism - you tell the public whatever you want them to believe regardless of the truth, perhaps even despite the truth.

If, by now, Canadians don't understand that Harper's word is meaningless, and many don't seem to get it or care, then he'll be free to manipulate the public as he chooses.

Oh, so that was why John Kerry came to town several weeks back. Harper once again giving the finger to Canadians.I am so sick of this dolt!