Are We That Bored That We're Promoting a New Cold War? Do We Remember What We Went Through? 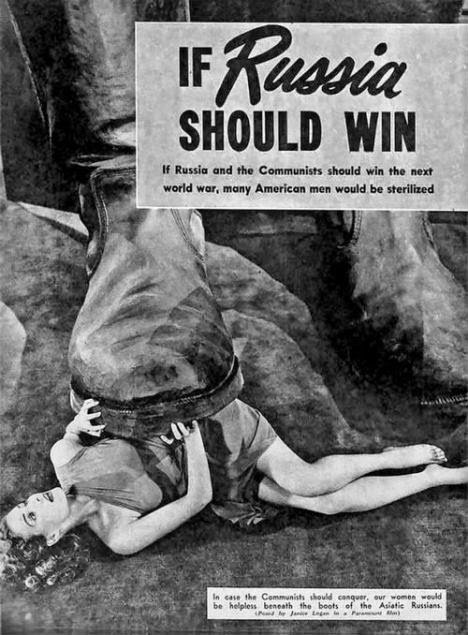 It begins by construing Russia as a threat.  No need to specify what sort of a threat or even who it threatens.  It's enough that we accept it as a threat.

The next step is to decide to engage Russia as a threat.  Anti-threat measures are called for and we've got a bagful of those we developed during Cold War I.  We simply up the ante and become threats ourselves, just for the sake of stability you understand.

James Goldgeier wants us to reinstate the old Cold War.  He's dean of the School of International Service at American University.

Twenty-five years later, Americans and Europeans should be quite pleased with the many successes of their joint endeavor to build a Europe whole, free, and at peace.

But after a period of expansion, it now seems that the West has reached the limit of its post-1989 Europe policy. Paradoxically, it must return to principles formulated in 1949—to concentrate on consolidating its gains while containing the threat that Russia poses.

...Twenty-five years after the fall of the Berlin Wall, it is clear that this policy has run its course. While most of Europe is free to pursue peace and prosperity, secure within the NATO alliance, Russia’s revived imperialism under Vladimir Putin has drawn a new line in Europe. The Russian president has illustrated, in 2008 in Georgia and in 2014 in Ukraine, that he will not permit former Soviet republics to join the EU and NATO. Moreover, he has begun to undermine those former republics—Estonia and Latvia—previously thought to be securely within the new Europe.

A revived strategy of containment is necessary to counter Russian aggression. Without stating this as his policy, President Obama has pursued this course since March, in the aftermath of the Russian annexation of Crimea. He has worked assiduously with his European counterparts to impose biting sanctions on the Russian elite as well as on key sectors of the Russian economy. At the same time, he has worked to reassure NATO allies in the East that the North Atlantic Treaty’s Article V commitment (which states that an attack on any member of the Alliance will be considered an attack on all members) remains robust. Obama’s attitude toward Putin is consistent with the approach U.S. diplomat George Kennan fostered in the late 1940s: keep Russia from undermining Western interests in Europe while waiting for internal pressures to eventually effect a shift in Moscow’s policy over the long term. The West cannot allow Putin’s aggression to destabilize the order it has constructed in most of Europe through the EU and NATO. Moreover, a vastly improved relationship with Russia must await new leadership in the Kremlin (and Putin may well remain as president through at least 2024 if elected to another term in 2018).

Formalizing a renewed doctrine of containment today would require that President Obama adjust his current policy to further bolster NATO and help Ukraine. Rather than simply settle for the idea of a small rapid response force that could be deployed on NATO’s eastern territory, the United States should push for the permanent stationing of troops in NATO frontline states to underscore the seriousness of purpose of the Alliance.  And the United States should assist the Ukrainian government by providing lethal military aid—impeding Putin’s successful efforts to date to disrupt the ability of the government in Kiev to establish order across the country. Consonant with the 1949 approach, the West must prevent Putin from appropriating more territory while acknowledging that Russia’s opposition to NATO and EU enlargement impedes the full implementation of the 1989 policy of a Europe whole and free.

Ultimately, Obama will need to publicly acknowledge that, given the current regime in Moscow, the United States and its European partners must contain the threat posed by Russia to the post–Cold War European order. Just as it did during the four decades of the Cold War, the West must remain hopeful that countries like Ukraine and Georgia will ultimately control their entire territories and be free to pursue their own futures, while maintaining pressure on Russia with hopes of moderating the Kremlin’s policy down the road. The post-1989 dream that Europe would be whole, free, and at peace yet again rests on another successful application of the West’s containment policy of 1949.

I don't know what it takes to become a dean at American University but it seems to rank up there with 'visiting scholar' at the Heritage Institute.  Dean Goldgeier demonstrates a remarkably simplistic and ideologically self-serving notion of what the Cold War truly was, its danger and the terrible price it exacted on the peoples from both sides.  It was containment, sure enough, but it was containment by nuclear confrontation and countless, often incredibly brutal proxy wars.  That we got through it without nuclear Armageddon involved no small degree of luck.  That this character thinks the path to peace entails starting that all up again and parking hostile forces permanently on Russia's borders is befitting of modern American thought or the relative lack of it.

We take this lightly at our peril. There are a lot of those well above our pay-grade who are floating this idea about the benefits of a new Cold War.  Meanwhile the West is busy getting its war face on and nothing shows that better than deploying the F-35, nuclear light strike bomber.  How long before we have those positioned in 'first-strike' attack range of Russia?

When standing at the cenotaph on the 11th how many will remember the Canadian soldiers who invaded Russia? Russia is rather testy because it has been invaded so many times by so many different armies including Canadian, British and, of course, American. Do the Russians trust us? I wouldn't.

I looked into this a few months back, Toby.

The aggression and force that the U.S. is using and has been using since at least 1945 including recently in the Ukraine according to Goldgeier is either something that is not taking place or is something that should be of no concern. What we should be concerned about though is Russia's alledged agression. What we really should be concerned about is Goldgeiers out right lying about the U.S.'s continued expansion in eastern Europe including control of Russia. His attempt to accuse Russia of the very agression that the U.S. is guilty of and only the U.S. smacks of propaganda at a most amateur level. It makes me very suspicious of what the U.S's next move with Russia will be. Russia along with China, Brazil, India and South Africa (CRIBS) wants to start trading oil in a different currency other then the U.S. dollar. This is the number one threat to the U.S. that countries start trading their oil in other currencies then American dollars. Saddam Hussein was going to start trading Iraqy oil in Euros and Kadafi along with other countries was ready to trade Libya's oil in another currency. Both countries were destroyed militarily by the U.S. and it's allies.The threat of the U.S. instigating however deceptively, the use of nuclear weapons is a very real possibility to me.

For an academic, Goldgeiger is remarkably adept at sculpting facts to suit his narrative. How such a wanton spinmeister could be a dean at anyone's college is worrisome.