They're now buying elections as efficiently as they once had to settle for buying politicians (or judges) and they're buying their way to ever dizzying heights of aberrant prosperity.

They're the top one-tenth of the top one per cent and, thanks to rampaging inequality in the United States, their wealth today is about the same as the bottom 90%. 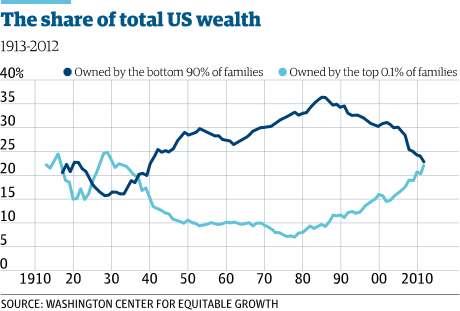 And spare us the nonsense about a rising tide lifting all boats.

The growing indebtedness of most Americans is the main reason behind the erosion of the wealth share of the bottom 90%, according to the report’s authors. Many middle-class families own their homes and have pensions, but too many have higher mortgage repayments, higher credit card bills, and higher student loans to service. The average wealth of bottom 90% jumped during the stock market boom of the late 1990s and the housing bubble of the early 2000s. But it then collapsed during and after the most recent financial crisis.

Yes, America is the extreme case when it comes to inequality but it sets the course for America's key trading partners also.  Oh well someone has to bear the cost of remaining "competitive" in our globalized economy and those on the top have the means to ensure it's not going to be them.

"And spare us the nonsense about a rising tide lifting all boats."

The slogan was surprisingly successful considering that anyone looking in a boat basin would notice rotting hulks that could no longer float.

Not "anyone." Not once the population had been suitably conditioned. There's a reason why so many people will persistently vote against their own and their country's best interests. That's conditioning and it just won the Republicans control of both houses of Congress.

Conditioning interests me. The Republican Party used to be the choice of grumpy old white men. This latest election shows that the Republicans have much broader support.

One has to ask how the Reform Party in Canada, which flirted with some ugly roots, managed to get such broad support as to put the likes of Stephen Harper in as PM. Something has gone terribly wrong with our voting public.

Harper, with a leg up from judge Gomery and a bent RCMP commish, got in on false promises of "accountability and transparency." Harper was also helped into power by Jack Layton as the two tag teamed weak Liberal leaders Dion and Ignatieff.

Mulcair is now fixing to perpetuate Layton's role as Harper bum boy. He'll happily attack the Liberals instead of focusing on Harper.

It would appear the only thing trickling down is the piss on our heads as they tell us it's raining.

On the other hand, when it comes to the NDP being Harper's bum boy and double teaming the Liberals, come now. During the Conservative minority, which party was it that consistently voted with the Conservatives? Oh yes, it was the Liberals. When there was a signed agreement to form a coalition to bring down the Conservatives, which party engaged in some fancy backstabbing and reneged? Oh yes, it was the Liberals, led by poor poor Michael Ignatieff planting the knife in Dion's back because he thought he was awesome enough to sideline the NDP and ride to a majority on a white-painted horse. If it weren't for Michael Ignatieff's arrogant belief that he could take it all, and his utter lack of ethics, and his incompetence, Stephen Harper would not be prime minister today.
Not sure what you would have wanted from the NDP at that point--for them to not campaign against the party that backstabbed them and consistently appeased the Cons, for the sake of . . . defeating the Cons? In any case, I don't see anything the NDP could have done that would have resulted in an Ignatieff victory.
You are definitely much further left than the current NDP, as am I. But nonetheless, for a disaffected Lib you still seem to have this belief that the NDP somehow owe it to the Liberals to roll over for them. You know, as finance minister Paul Martin probably damaged this country as much as Harper has managed so far. His cuts were done with less glee, but they were much deeper; he broke the foundations that Harper then trampled and shat on. And Ignatieff would have made about as bad a PM as Harper--that smug, vicious torture-apologist sophist would have done all the black deeds of a Harper while proclaiming their whiteness in highflown yet unconvincing language.

No, PLG, my belief is not that the NDP should roll over for anyone. It is that the NDP should battle Harper, not the Libs, and leave it at that. These two parties are not going to merge but they don't have to help Harper by squabbling between themselves.