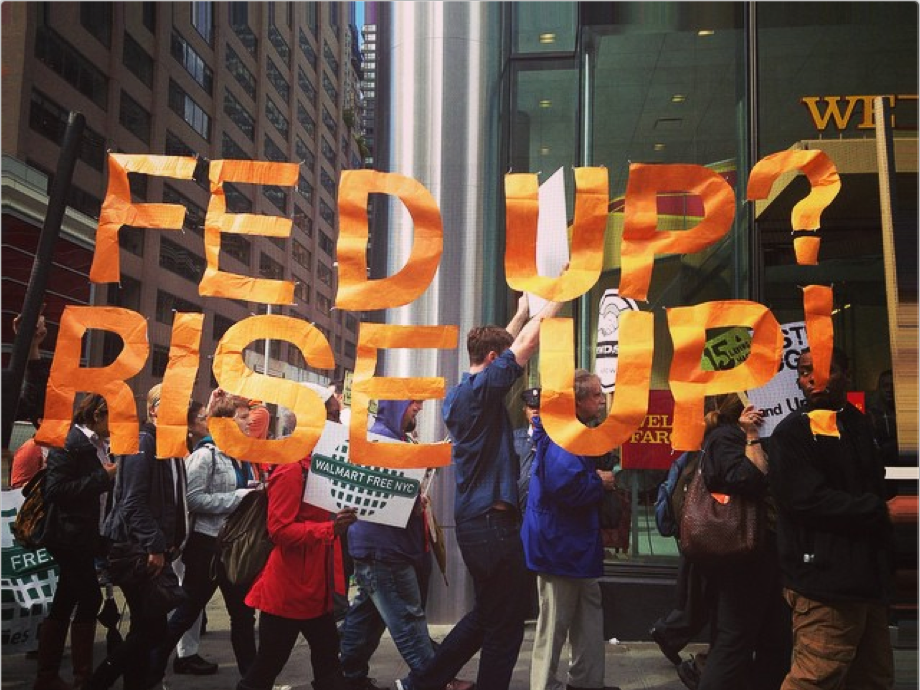 You may not be familiar with the notion of "Blockadia."  It's an umbrella term for the loosely connected 'web of campaigns standing up to the fossil fuel' industry.  The protesters getting arrested daily on Burnaby Mountain, standing in defiance of Kinder Morgan - that's an example of Blockadia.  It's an idea captured in the documentary, "Blockadia Rising: Voices of the Tar Sands Blockade."

It seems to be disproportionately a battle that pits old versus young.  It's old white men like Stephen Harper, Mitch McConnell, Leatherback Joe Oliver, in pursuit of the maximum extraction of fossil fuels against young people of all descriptions, the people who will have to live with the impacts the old bastards are bequeathing them.  From this generational divide it's easy for those old bastards who manipulate the levers of power to denounce as radicals and extremists those who seek nothing more than to defend the future world they'll have to inhabit from those so eager to ruin it.

If you harbour even some doubt that these protesters might actually be extremists and radicals you have a dangerously weak grasp of just what is happening.  You need to open your eyes.  You need to think and you need to see the world of the near future that our young people will have to experience.

For the sake of this journey let's begin with the recent report from the World Bank whose researchers have concluded that we have already passed into a state of irreversible climate change.  Given the greenhouse gases we've already put into the atmosphere, we're "locked in" to at least 1.5C of global warming.  At this point we usually nod off and yet this is the beginning point of our discussion. Let's focus on 1.5C and what it means.  As I wrote yesterday:

...bear in mind ...that what we're dealing with already - the droughts, flash flooding, the severe storm events, the Polar Vortex and such is the result of just 0.8 degrees Celsius warming we have already experienced since the beginning of the Industrial Revolution.  Just 0.8C, about half the 1.5C warming the World Bank research says we have already 'locked in.'  Just half.

Something else even more important to bear in mind.  We are - today - November, 2014 - effectively at 1.5C.  The greenhouse gas emissions that will warm the planet by 1.5C are already at work in the atmosphere.  It will take years, decades before those highly persistent gases drive the planetary temperature to 1.5C but that's just a question of time.  That's a situation we have already created even if we only have to deal with 0.8C ourselves.  It's a gift that just keeps on giving for quite a while - decades, generations - to come.

So, we're effectively at 1.5C today.  But we're not done, are we?  No, we're going to continue to emit ever larger volumes of greenhouse gases into the atmosphere for years to come, with or without international agreements.  In reality our kids and theirs aren't going to have to ride out the severe weather events that 1.5C will bring because, by continuing to add ever more greenhouse gases, our stubborn refusal to decarbonize,  they won't be lucky enough to have to deal with just 1.5C.  They're more likely looking at somewhere between 3C or, quite possibly, even 4C.  And that's the wheel of fortune we're spinning for them right now.

Here's something else to keep in mind.  It's not our great, great, great, great-grandchildren who might have to deal with very great threats. It's our own children - mine and yours - for whom this will be by far the most significant and dangerous influence in their lives.  That will be with them forever and they'll have to confront it at different levels, in numerous forms for the rest of their days.  For their children, however, your grandchildren or great-grandchildren, well they'll be born into it. It's all they'll ever know.  And that's the world we're building for them today, one for which they may well bitterly curse us.

Here's the deal.  We brought our children into this world.  We are responsible for the world we pass to them.  We have to understand that those young people being arrested on Burnaby Mountain are fighting for their right to exist in a livable world.  To reptilian bastards like Joe Oliver his right to flog the world's highest cost/highest carbon synthetic oil trumps their right to a secure life. They're fighting to prevent the already locked in 1.5C from becoming 2.5C or 4.0C and they know their very future depends on preventing that.  They're in a fight that they did not ask for, a struggle they never deserved to face.

I've been mulling a metaphor . . . well, a simile really. Climate change is like sticking a knife in someone's back. In this case, in humanity's collective back.
We're in mid-stab. So far, the knife is in a few millimetres and people can look at the floods and the droughts and stuff, and say "Well, it's only a flesh wound. Some blood, but nothing serious happening here". But the impetus is still pushing it in. It's going to be travelling another few millimetres even if you shoot the knife-wielder right now.

Meanwhile something like the Kinder Morgan pipeline may only push the knife in another millimetre. And Northern Gateway, another millimetre, and Keystone or Eastern Whatsit a millimetre or two each, and so on for all the other fossil fuel expansions or stupid government decisions not to build alternatives. But a millimetre here and a millimetre there and pretty soon you're not in flesh wound territory any more, you've slipped between ribs and you're hitting liver and lungs.

We need to take the knife away from the Richard Kinders of the world before they backstab us any deeper.