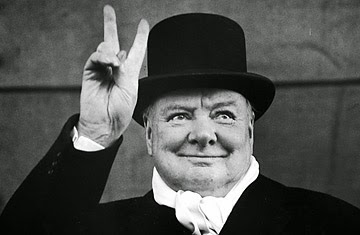 Ever since Bush/Cheney ushered in the "war is fun"era, the Right has absolutely fawned over everything Churchillian.  The invoke Churchill when they want to berate others for supposed appeasement.  They channel Winnie's spirit to help them through the dark moments.  They glibly contend that, if Churchill had managed to get his way, Hitler would have been stopped in his tracks and, who knows, WWII might have been averted altogether.

Yes, Winnie the peacemaker.  That's the spirit.  Except that, after the war, Churchill really, really, really wanted to nuke Russia.


Winston Churchill urged the United States to launch a nuclear attack on the Soviet Union to win the Cold War, a newly released document reveals.

The previously unseen memorandum from the FBI archives details how Britain’s wartime leader made his views known to a visiting American politician in 1947.

Churchill believed a pre-emptive strike on Stalin’s Russia might be the only way to stop Communism conquering the West.

The note, written by an FBI agent, reports that Churchill urged Right-wing Republican Senator Styles Bridges to persuade President Harry Truman to launch a nuclear attack which would ‘wipe out’ the Kremlin and make the Soviet Union a ‘very easy problem’ to deal with.

The Russians would have been defenceless against a nuclear attack at that time – they did not successfully test their own atomic bomb until 1949.

The note continues: ‘He pointed out that if an atomic bomb could be dropped on the Kremlin, wiping it out, it would be a very easy problem to handle the balance of Russia, which would be without direction.

‘Churchill further stated that if this was not done, Russia will attack the United States in the next two or three years when she gets the atomic bomb and civilisation will be wiped out or set back many years.’

Too bad the old bugger didn't live long enough to witness the evolution of today's permanent warfare state.  That he would've loved.
Posted by The Mound of Sound at 9:39 AM

Mound, why don't schools teach history anymore? Or, if they do, why don't people learn? I have known that Churchill wanted to attack Russia (as did Curtis LeMay) for so long that I can't remember from which book I first learnt it. Maybe that's the question, am I the last one to still read books without pictures?

Your post is important. People should know that WWII was as much about Churchill and other hawks as about Hitler and Nazis. People should also know about the Western, mostly British and American financiers and corporations who sponsored Hitler and the German war machine both before and during the war, making huge profits therefrom. Without that backing it would have been a short war, if at all.

It is important to remember the sacrifices of our fallen soldiers but we should also remember that wars are not necessary until the demagogues and profiteers deliberately push us all over the edge.

Churchill was the first Reagan. A myth way bigger than the man.

How did those gas attacks against the Kurds work out anyway?

Steve is on to something, Toby.

Churchill, as colonial secretary, ordered the gassing of Kurdish villages that were failing to remit taxes.

As to your question, Toby, I don't know why history is such a neglected subject today. Latin, okay I can get that, but history is so fundamental to our ability to make sense of the world around us. I recall a Vancouver teacher who argued that, since so many of her students were new arrivals from other lands, it would be unfair to them to focus on Canadian history to the exclusion of their own homelands'.

I once hired a very pleasant young receptionist who had achieved some sort of academic recognition in high school somewhere up the Fraser valley. I was reading the morning paper and there was an item about John Diefenbaker. She had no idea who that was. I then offered her a raise of $5 a month for every Canadian prime minister she could name, Macdonald, Trudeau and Mulroney (then in power) excepted. All I got was a blank stare. It didn't cost me a penny.

You know, when it comes right down to it, it's hard to differentiate between Churchill and Hitler. Both murderous maniacs.

Neither had any great qualms about attacking civilians.

He sent armed troops against striking mine workers in Yorkshire. UK