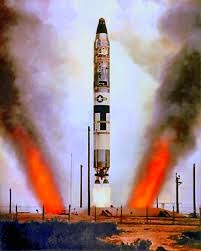 US Defense Secretary, Chuck Hagel, put it bluntly.  "No other mission we have is more important."

The mission Hagel was referring to was a trillion-dollar, 30-year programme to upgrade America's nuclear weapon arsenal.  A trillion dollars.  Even today that's serious money.


According to the Associated Press, Hagel told the Pentagon on Friday that the decision to upgrade the US nuclear weapons arsenal came after a series of reviews. He said that the internal and external reviews revealed "a consistent lack of investment and support for our nuclear forces over far too many years has left us with too little margin to cope with mounting stresses".

The embarrassing state of the US arsenal was underlined by the review finding that some of the aircraft used by the US military date from 1969 and had seen action in the Vietnam War.

Hagel admitted: "The root cause has been a lack of sustained focus, attention, and resources, resulting in a pervasive sense that a career in the nuclear enterprise offers too few opportunities for growth and advancement."

The US annual spending on its nuclear forces is $16bn and it is expected to increase on average by 10% annually for the next five years.

The programme conflicts with Obama's previous campaign promise to create "a nuclear-free world".

However, with the rise in tensions between the White House and the Kremlin over Ukraine, and the longstanding threat of North Korea, Obama's nuclear upgrade will do little to help international relations.

Russia announced last week that it would be boycotting an international nuclear security summit, scheduled to be hosted by Obama in 2016.

It takes enormous courage to end one of these things and just a cold wind on the back of the neck to start it up again.

I think China and Russia are laughing, all the way to the bank, at Harper's stupidity. I believe Russia and China are to share our High Arctic, very nicely with each other.

How will they pay for it?
U.S. National debt almost $18 Trillion:

I expect they'll pay for it with money lent by China.