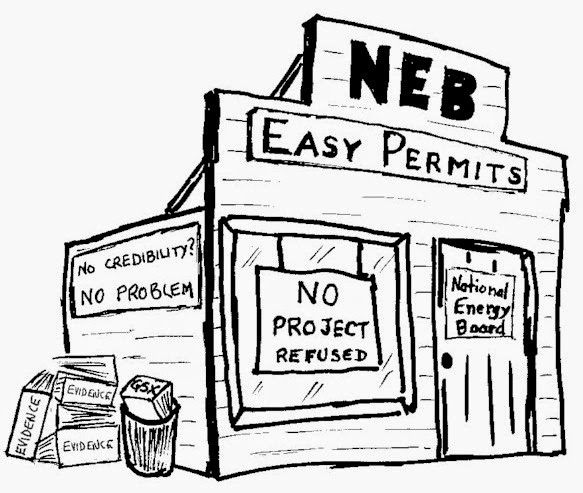 There's no trace of hyperbole in denouncing Stephen Harper as the Great Corrupter.  He is corrupt and he corrupts whatever he touches whenever and however it suits him.

The proof is pretty much everywhere but a shining example is the National Energy Board.   Take it from Marc Elieson, an energy executive and former CEO of BC Hydro.


Marc Eliesen  ...has quit his role as an intervenor in the federal review of Kinder Morgan's Trans Mountain pipeline and oil tanker expansion project, calling the National Energy Board "a truly captured regulator."

Eliesen has worked in the nation's energy sector for 40 years. In addition to running the nation's largest hydro utilities, he served in a variety of senior positions in both federal and provincial governments of all stripes, including as Ontario's deputy minister of energy.

Now retired and living in Whistler, B.C., the 73-year-old Eliesen resigned from his intervenor responsibilities after the board repeatedly demonstrated what he called a "lack of respect for hearing participants," as well as a disregard for "the standards and practices of natural justice that previous boards have respected."

Today's National Energy Board is bent.  It's a stacked deck, utterly corrupt.  It more closely resembles the courts that tyrants like to establish to do their dirty business.  It makes ruling after ruling barring relevant evidence and excluding unwelcome participation.   It sees only what it wants to see, it hears only what suits its predisposition.

Let's put it this way: you don't go to these lengths to cheat if you have any chance of winning fairly.  A national regulator should not be a den of skulduggery, a rubber stamp of perfidy.

Why on Earth then should British Columbians accept the perverse rulings of this "truly captured" regulator or its soiled process?  Why should we take it as anything less than an admission that we're being set up so that out-of-province interests can have their way with our coast?

I read his resignation and I must say the man should be celebrated. Maybe he should be Prime Minister. I can't help thinking though what the character assassins will dream up for him. Surely he will be sued by KM or at least labeled an Eco- terrorist and have his citizenship revoked.

It's just another nail in Harper's coffin. I am regularly amazed at the depth of resentment they're building in my fellow coastal British Columbians.

They just keep reminding us that they'll stack the deck against us again and again which means we're battling an illegitimate process, a governmental fraud on the people of British Columbia.

Harper has known for a long time, Mound, that he can't win an argument -- unless the deck is stacked.

And he claims -- with righteous indignation -- that the cheats are everywhere.

Andrew Weaver (MLA for Oak Bay and the sole elected Green party member) also had trouble dealing with the NEB's process for Trans-mountain.

Basically, transmountain can't be bothered to cite their sources, and the NEB doesn't seem to care.

Everybody learns back in grade school the how and the why of citing sources. So anybody (whether pro, con, or neutral about Trans-mountain) ought to be quite dismayed at how the NEB is running this show.

Maybe you wouldn't expect the NEB to be putrid. But you're only finding out now, because it is now forced to interact in the public eye.

I fear every other federal department is in the same boat. People just have not realized it because most parts of the government don't have a lot of interaction with the public, and when they do, it is often not of a pressing interest to the general public, and so doesn't get the media. To give one recent example, there was the space agency fiasco where Harper denied visas to Chinese and Russian delegates who were to attend a meeting, and even didn't bother to inform the space agency of this.

Chris, glad that another British Columbian chose to weigh in. What do we do? The people who assure us they're going to safeguard our coast instead hold a knife to our backs. We really didn't need Eliesen to tell us this is a rigged process but he does eradicate the slightest doubt.

They're not doing this entirely to be pernicious. Not entirely. However once we're dealt out of the game, like this, the appellation "national" in National Energy Board loses all meaning. A "national" anything would be unassailably fair. What we've been given is something like a parish court house in Louisiana.

We can't rely on the rest of Canada to do what's right. They've been pretty mute so far. The opposition parties have been anything but assuring.

So what do we do? I'm of a mind that, if they will go to such devious lengths to undermine British Columbians and render their rights as subordinate to what the G&M defines as the "national interest" isn't it time we began thinking seriously about renegotiating Confederation or else explored leaving altogether? That is my mind.

We just can't allow ourselves to be pistol whipped like this. After that we're barely submissives.

What they're doing is wrong. The way they're going about it is utterly malevolent. There are times when the other side's conduct makes it imprudent, fatally so perhaps, to remain in league with them.

We cannot allow Ottawa to use the resources of the national government to suppress our opposition to something that obviously imperils our coast. They play dirty. They write the rules and fix the deck.