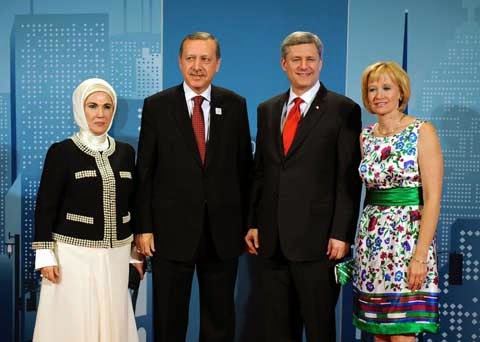 Former diplomat Harry Sterling looks at Turkey's thuggish leader Recep Erdogan and sees much that reminds him of our own prime ministerial punk, Stephen Harper.


While Prime Minister Stephen Harper and Turkey’s President Recep Tayyip Erdogan obviously come from different backgrounds, both managed to not only polarize their populations and undermine national unity, but also have damaged their nations’ international standing in the process.
In Harper’s case, he not only has polarized the Canadian population by his divisive policies, he’s also alienated foreign nations, some of whom traditionally had positive views of Canada and its international policies.
Whereas previous Canadian governments were often viewed positively by other governments, especially Canada’s attempts to pursue well-thought-out and balanced policies, this changed dramatically under Harper.
...The prime minister’s confrontational performance on the world stage reached the point where other countries alienated by his often-negative role on global affairs reached the point where, for the first time, Canada’s candidacy for a non-permanent seat on the UN Security Council failed to obtain enough votes.
It was a direct rebuke of his government’s controversial international policies, including his unquestioning support for Israel’s illegal occupation of Palestinian land, major cutbacks in aid to African nations, plus obstruction of international co-operation on global climate change.
Interestingly, the recent failure of Turkey to become a temporary member of the UN Security Council also turned out to be a direct result of Erdogan’s highly personal and dubious policies both at home and abroad.
...Like Harper, Erdogan — recently elected president — has never suffered from lack of self-esteem. He, too, has difficulty accepting criticism or the idea that others might also have views worthy of respect.
Despite their diminished international standing, both leaders seemingly have managed to prove the widespread view that, in the final analysis, most political elections are ultimately determined by local considerations and not significantly affected by international issues.
Erdogan seemingly proved that by winning the presidency in April.
And despite his dubious foreign-policy image, Harper apparently expects his Conservatives to win again during Canada’s forthcoming election.

That is an interesting picture. Both of the women look like they would rather be somewhere else. Even Erdogan looks distracted. Harper, as usual, is smiling for his photo op.