Dear Tony, You Can Kiss Our... 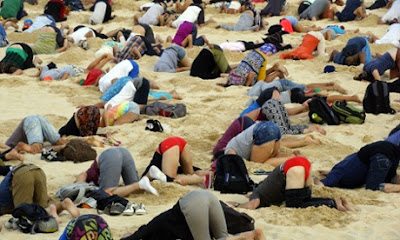 A group of Australians gathered on Bondi Beach to bury their heads in the sand in protest of their prime minister's fossil fuel fetish.

More than 400 protesters stuck their heads in the sand on Australia’s Bondi Beach on Thursday, mocking the government’s reluctance to put climate change on the agenda of a G20 summit this weekend.
Prime minister Tony Abbott’s perceived failure to address climate change is all the more galling in the wake of an agreement between the United States and China on Wednesday to limit their carbon emissions, they said.

“Obama’s on board, Xi Jinping’s on board, everyone’s on board except one man,” activist Pat Norman, 28, bellowed into a megaphone on the Sydney beach.

“Tony Abbott!” the protesters shouted back (presumably before they stuck their heads in the sand). 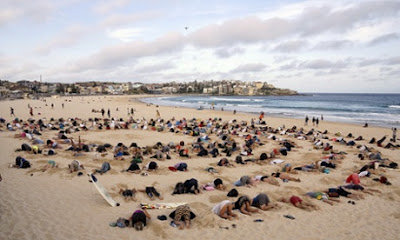 Another RC thinking God will save. Or rather if he spends time on his knees every day...God will give him a special place in the realm of God´s district.