When My Enemy's Enemies Are Still My Enemies 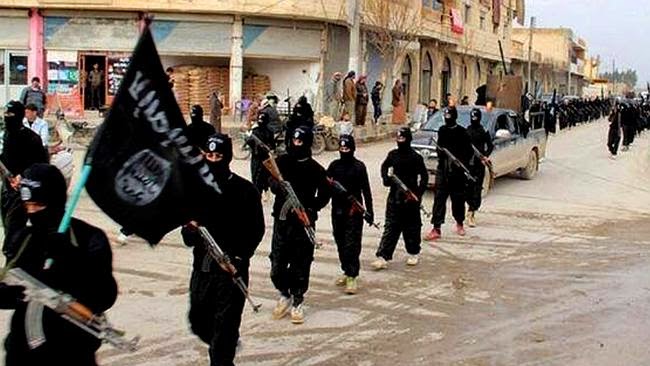 One of the greatest mistakes we make in the conduct of modern warfare is to make our conflicts suit a politically palatable narrative.  It can seem as though the spin doctors are as powerful as the generals which might explain why they seem to do an equally marginal job at it.

We went to war in Afghanistan with a fairly powerful narrative about al Qaeda and the Taliban that was, at first, highly persuasive to the public.  They practically demanded that we wipe them from the face of the Earth.  Then, because the narrative was at odds with the facts, we gradually lost interest. After a decade of full contact "Whack-a-Mole", we loaded up our shipping containers and left.

The Talibs are back in force in Afghanistan.  al Qaeda used Washington's invasion of Iraq to re-invent itself and, since then, has spawned a network of franchise operations that extends to the westernmost regions of North Africa.

Iraq.  Oh, that's right.  Western forces hung around there for years, nurtured a brutal and corrupt sectarian government that could never hold the place together, and, as is our way, got bored and left.

The flavour of this year is ISIS, the Islamic State.  President Obama has given the US and America's Foreign Legion (that includes us) our marching orders. We're to bomb ISIS into fragments from the skies over Iraq and, maybe, Syria.

To justify our current war we need a narrative of ISIS as a rabid, bloodthirsty band of religious fanatics intent on creating a Caliphate to rule the region and, ultimately, the world.  Take down ISIS and problem solved.  Except that, as usual, the narrative is at odds with the facts.

ISIS isn't the real problem.  It's a symptom of a nascent, Shiite versus Sunni religious war, a sectarian Muslim holy war, that reaches beyond the borders of Syria and Iraq and already reaches into Pakistan, Iran, Lebanon and Saudi Arabia and could spread even farther. 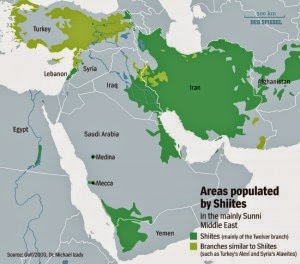 Iran is fighting militant Sunni groups, mainly the Baloch who occupy the southern, resource rich region of Pakistan.  This has already led to clashes between Iranian and Pakistani military units.

A Shiite village in Sunni-dominated Saudi Arabia was attacked by Sunni militants.  The House of Saud is deeply worried about the country's Shia minority who are the majority in the same areas as many of the country's best oil reserves. The Saudis fear Iran could move to annex its Shiite minority region (as the Russians did in Ossetia and Crimea).  From Lebanon's Daily Star:

With civil wars in Iraq and Syria now being fought along mainly sectarian lines, Saudi Arabia's Shia minority feels increasingly vulnerable in a country where anger is rising among the majority sect at the plight of Sunnis in other countries.

Sunni jihadis now speak about Shiites as the greater enemy to members of their sect than the Western governments that were formerly their most hated foes.  The Saudi government has done little to stem a corresponding upsurge of provocative language there.

"For sure criticism of Shiites by clerics and religious television stations creates the atmosphere where this can happen.  In our own schools the teachers tell our cchildrenthat we are not Muslims," said a witness of the shooting who did not want to be named for fear of repercussions.

Of course this isn't just a Sunni versus Shiite sectarian war.  It's fundamentalist Sunni Islam, of the type practiced by the sheikhs and princes of the Gulf States, versus moderate Sunni Islam, Christians and other groups too.  The Kurds of Iraq and Syria now engaged in heavy fighting against ISIS are a perfect example.

And a pot this full is almost too tempting for others not to stir.  The Lebanese accuse Israel and the Sunni extremists of trying to spark a civil war to bring down their country.

"Independence Day arrives while Lebanon battles the odds ...in an ordeal not destined to end until [Lebanon's] inevitable victory in the battle for existence and identity in the face of organized terrorism, which is seeking to ...strike at its elements of existence through inciting [sectarian] strife and setting the stage for a civil war by targeting the military institution and other security agencies."

"Zionism is equally as dangerous [a threat] as takfiri terrorism," he said.

Without naming them, Ibrahim said takfiri groups - clearly indicating ISIS and the Nusra Front - in addition to Israel have similar objectives, while each party "is trying to strengthen its status."

Israel is tacitly allied with Saudi Arabia and the Gulf States in opposition to Iran. What Saudi Arabia is really up to was conveyed by Prince Bandar-bin-Sultan to the former head of Britain's MI6, Sir Richard Dearlove.

Some time before 9/11, Prince Bandar bin Sultan, once the powerful Saudi ambassador in Washington and head of Saudi intelligence until a few months ago, had a revealing and ominous conversation with the head of the British Secret Intelligence Service, MI6, Sir Richard Dearlove.  Prince Bandar told him, "The time is not far off in the Middle East, Richard, when it will be literally 'God Help the Shia.'  More than a billion Sunnis have simply had enough of them."

Somebody recruited, trained, armed and funded ISIS.  Who could that be?  One of our confusing pack of allies perhaps?  Almost certainly.  We know that ISIS has been lavishly funded by the affluent sheikhs and princes of Saudi Arabia, Kuwait and Qatar.  It's the same bunch that raised al Qaedsa and ISIS and will raise the next gang of radical Islamists we'll have to fight.  And these are our allies.

The old "my enemy's enemy" business no longer applies in the Middle East. We have no allies worthy of the name. We seem to be getting dragged into a sectarian bloodbath we can't control and certainly cannot fix.  We may be bombing the Sunni fundamentalist outfit, ISIS, at the moment but we didn't fail in Iraq or Afghanistan for want of bombs.  If anything we demonstrated, again and again, that All the King's Horses and All the King's Men are far from decisive in these confused conflicts.

We have gone into a war - again - on the strength of a narrative at odds with reality and that, naturally makes almost no sense.  It is a hallmark of the truly miserable calibre of political and military leadership we endure today.

If we really want to show the flag by bombing the hell out of someone, let's go where we might actually do some good.  Let's defend Lebanon.