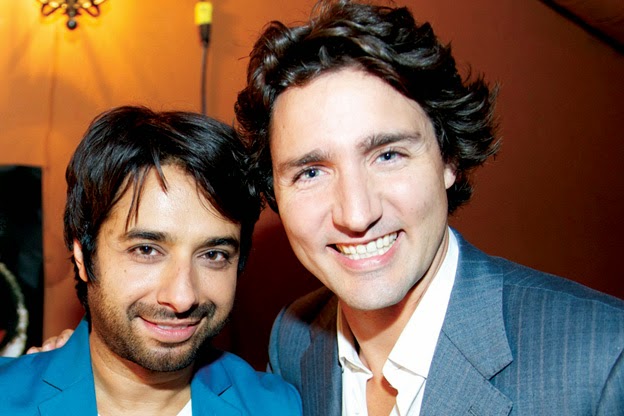 Jian Ghomeshi is going to have his say - from the prisoner's dock.  He'll face four counts of sexual assault and one of overcoming resistance by choking.  Unless he cuts some sort of bargain on a guilty plea, consent will be the make or break issue and the odds are pretty long for the former CBC radio star.

As for consent, well Ghomeshi is said to have consented to withdraw his $50-million lawsuit against the CBC. Apparently Jian finally figured out that, like himself, it wasn't going anywhere.

I'm just guessing here but do you think Justin wishes he could take this photo-op back?
Posted by The Mound of Sound at 9:54 AM

My hope is that they put his teddy bear on the stand. I want to know what the teddy bear was allowed to witness.

Apparently the teddy bear refuses to cooperate with investigators. He claims he was always turned into a corner whenever Ghomeshi was on a roll.

I would like to know what his "safe" word is. Obviously it didn't work.

I expect that's so, Pamela.

What a slease bag that short one is.
Anyong

I never really paid any attention to Ghomeshi. I knew who he was and that he was quite popular but that was about it. He seemed to strike "cool" looks on camera but now, when I see those photos he looks sleazy.,