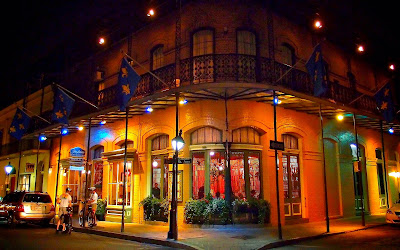 There's always been a seedy undercurrent to New Orleans - everything from street hustlers to corrupt politicians.  It's part of the flavour of the place.

Now it turns out the Big Easy has been going easy on rapists thanks to a municipal detective squad that couldn't care less.

... a city inspector general’s report claims five detectives failed to do substantial investigation of more than 1,000 cases of sex crimes and child abuse — with one detective being cited for stating a belief that simple rape should not be considered a crime.

The US Justice Department previously investigated the scandal-plagued police force and in 2012 the city agreed to a host of changes in its policies. Among the federal probe’s major findings were that the police force was rife with corruption and had numerous instances of excessive use of deadly force, discrimination and problems with its sex crimes unit. A federal monitor is overseeing compliance.

The latest city report charged that a detective handling child abuse failed to investigate a case involving a three-year-old brought to an emergency room due to an alleged sexual assault, closing the case without any charges even though the child had a sexually transmitted disease. The same detective closed the book with minimal or no investigation, and again with no charges, on two cases involving children brought to the emergency room with fractured skulls, the report said.

Another detective, this one assigned to handle sex crimes, allegedly told several people that simple rape should not be considered a crime, the report charged. Simple rape happens when a person has sex with someone without their consent.

When you consider the number of officials, other than these detectives themselves, who must have had some notion of what was going on or not going on, it makes you wonder if this isn't a sign of a general descent into chaos.

Vice News brings this story of an El Paso cop shown on video as executing a handcuffed man.

The relevant part of the video begins around the 18:00 mark.  To compound this blatant police killing, the department set up a wall of obfuscation.

The bullet went through Saenz's left shoulder and into his chest, piercing his heart. The authorities called it an accident. They said that the guard knocked Flores as he pointed his drawn weapon, causing it to fire. They said that Saenz could have moved his cuffs to the front of his body and, with his strength, use them as a weapon. They said a taser would not suffice to subdue him.