"Coal Is The Future" - Tony Abbott 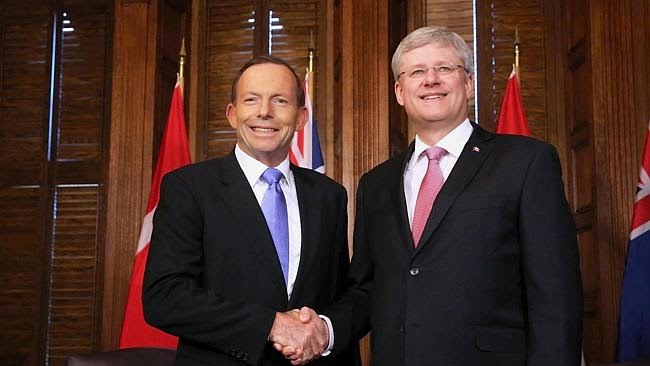 Australia's prime ministerial windbag, Tony Abbott, leaves no doubt about where he stands on climate change - it's "crap."  Since coming to power, the now seriously unpopular Abbott has wasted no time boosting coal energy, coal exports and dismembering the country's renewable energy and climate change initiatives.

Here's what Abbott had to say today on the subject of coal.

That's about as "in your face" as it's possible to get.  Australia, like Canada, is and will remain a committed climate change pariah.  Count on Australia to support the Harper government in its never-ending efforts to subvert global action to minimize climate change.

Also in today's Guardian is a report on how CO2 emissions have increased since Abbott scrapped Australia's carbon tax four months ago.  The biggest increase comes from brown coal generators in the country's electrical utilities.  Quelle surprise!~
Posted by The Mound of Sound at 9:07 AM

Tony Abbott and Stephen Harper - surely in a class all their own.

And the world weeps for it, Lorne.

I cannot fathom the mental calisthenics required for these eco-bozos. It is so simple, nature has stored excess carbon in the mantle in such a way that promotes the life we find on the planet currently. To pull that back out and put it in the system again will change the system and make it a system for different lifeforms. I am going to burn an effigy of Stephen Harper for Guy Fawkes day tomorrow, it's the least I can do.

Abbott and Harper adhere to the maxim that "ya gotta dance wit da one dat brought (bought) ya."

@ Tim. Spot on. We take the carbonized remains of millions of years of organic life, drag it to the surface and think we can burn it over the course of a couple of centuries without devastating consequences. Unfortunately the public never think of it in that context.

It's basically a bunch of old white men back at the trough for more income and corporate tax cuts under a green banner. They say cut these taxes and corporations will invest in green technology. Yeah right. More of the same failed neoclassical supply-side ideology of Milton Friedman.

"Canada's Ecofiscal Commission launches today advocating a single, overriding principle: To start putting a price on pollution and stop taxing income, employment, profits and other things we actually want more of in our economy."

Whether one believes a sustainable market economy is possible, it's clear neoclassical trickle-down economics is the greatest threat to humanity: towering levels of inequality and government debt, boom-to-bust economic instability, and a global regulatory race to the bottom (at a time when a global regulatory regime is need the most.)

BTW, it's clear these neo-cons don't want a real price on carbon. They want cosmetic carbon taxes that will allow oil corporations to export Alberta's tar with less flak from environmental groups and foreign governments. But they'll take the big income and corporate tax cuts just the same...