It's Down! Philae Lands on Comet. 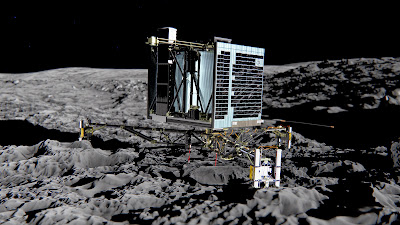 Here's a name you'll never remember:  67P/Churyumov-Gerasimenko. That's the official name of the comet that's now playing host to the European Space Agency's Philae lander as both hurtle through space at 66,000 kms. per hour. Here's what the lander's new home looks like. 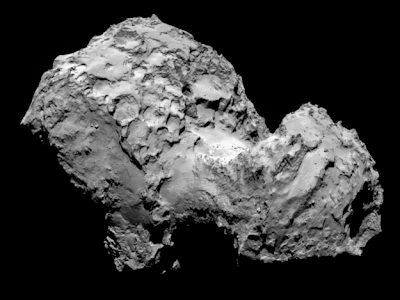 It took 7-hours for Philae to touch down on the comet after separating from the Rosetta spacecraft that was launched on 2 March, 2004.  Rosetta has spent more than a decade getting into position for today's landing.

Scientists have likened the trillion or so comets in our solar system to time capsules that are virtually unchanged since the earliest moments of the universe.
"By studying one in enormous detail, we can hope to unlock the puzzle of all of the others," said Mark McCaughrean, a senior scientific adviser to the mission.
Rosetta and Philae now plan to accompany the comet as it races past the sun and becomes increasingly active in the rising temperatures. Using 21 different instruments, the twin spacecraft will collect data that scientists hope will help explain the origins and evolution of celestial bodies, and maybe even life on Earth.
"The science starts the minute we get down to the ground," McCaughrean said.
Posted by The Mound of Sound at 9:34 AM

Landing a spacecraft on the comet is a stunning achievement.

I am not a scientest but that comment looks way older than 6000 years?

I love watching achievements like this.
It restores my belief in human greatness. The human mind is truly amazing. Thx for posting this.

Comet, damm it Jim I am not a scientest or and English Major.