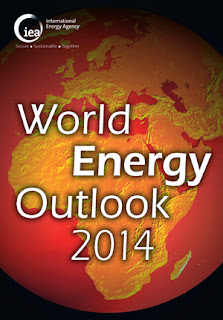 The International Energy Agency has released its latest World Energy Outlook and it paints a pretty grim picture of our future.


The agency sees global energy demand growing by 37 percent and carbon dioxide emissions from burning fossil fuels increasing by one-fifth between now and 2040 mostly because of crude oil and coal burning in Asian countries and Africa.
That increase in CO2 emissions will make it extraordinarily difficult to avoid the dangerous consequences from global warming outlined by the Intergovernmental Panel on Climate Change in its latest assessment, the IEA warns.
Here’s why: Capping a global average temperature increase at 2°C (3.6°F) over pre-industrial times — the internationally agreed-upon point beyond which the effects of climate change have been deemed to become dangerous — requires capping total future global CO2 emissions at 1,000 gigatonnes beginning this year. That’s called the carbon budget, and it’s likely to be used up by 2040, the IEA said.
The IEA says the world’s fossil fuel consumption in the coming decades is leading to an average global warming of 3.6°C, or 6.5°F, making catastrophic sea level rise, polar ice cap loss, water shortages and other severe effects nearly inevitable.
Unless it cuts back its use of fossil fuels right away, China is on track to become the world’s largest oil-consuming nation by the early 2030s, at the same time as U.S. oil consumption is likely to fall. China is also likely to consume half the world’s coal by the middle of the next decade as global coal demand grows 15 percent between today and 2040.
This is the future as Tony Abbott and Stephen Harper see it.  Unless China and the US make serious efforts to slash emissions very soon, and ride roughshod over countries like Canada and Australia to compel them to follow suit, everything else is merely good intentions and we know what paves the road to hell.

The IEA outlook is similar to the OPEC forecast released last week.
Posted by The Mound of Sound at 12:05 PM

Goulash for brains. All of those so called intelligent leaders of the world can´t get past their bank account.