Ghomeshi Deserves His Say - In a Criminal Court 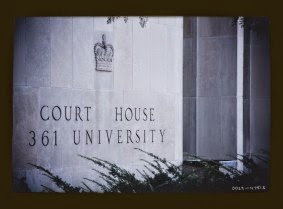 I've never been a fan of Jian Ghomeshi.  It was me, not him.  Just not my thing. That said I was a bit uncomfortable when he was hit by accusations of what seem to be sexual assault leveled anonymously.

I found his defence of consensuality curious.  It seemed to negate the celebrity that Ghomeshi seeks to retain.  Yes, what goes on in the bedrooms of the nation between consenting adults is no business of the state - generally speaking.  Still, one's right of privacy is not quite the same for a celebrity.

You may have the right to be pervy but if I don't care for that sort of thing and find it distasteful, your right to privacy doesn't mean that fans are obliged to expunge it from their minds.

Fortunately, for me at least, all this debate and angst has been swept away by three brave women who have taken their accounts to the Toronto police.  Perhaps their example will persuade others to also come forward.  I hope so and if police investigators find criminal conduct I hope Mr. Ghomeshi faces trial on the appropriate charges.

In the court of public opinion, Ghomeshi already stands condemned.  His once stellar career is over, broken on the shoal of his own arrogance, brutality and self-indulgence.  Ghomeshi is no longer fighting to defend his career.  At this point he's fighting for bigger stakes - his freedom.
Posted by The Mound of Sound at 11:46 AM

Consent is not an excuse to hurt someone.

.. needs serious help for a dangerous mood disorder
If he can't recognize it.. healthcare pros do ..m

you said it, I watched the whole self destructing affair with the FB post and the star articles and I thought good bye Ghomeshi.
but when the women came forth and charged him, and there is a potential of over 20 victims that could give background, evidence and corroboration, I thought thats it--its moved on from public condemnation to potential jail time. I bet he is going to use his vast fortune to defend his actions.
so no career, no fans, no respect, no money and no freedom.
How the mighty fall, with a great big resounding crash.