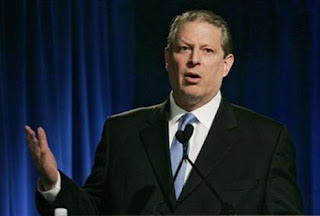 Al Gore may be the most influential politico not to be running in the 2008 US presidential election.

Gore plans to hold the candidates' feet to the fire over global warming. On this evening's 60 Minutes, Gore unveiled a $300-million initiative to force climate change to the top of the candidates' debates.

"The first television advertisements, which are to begin airing on broadcast networks as well as cable starting on Wednesday, will pair up the most unlikely partners in the movement to address global warming.

A clip aired on CBS showed the Reverend Al Sharpton sharing a sofa with the conservative preacher Pat Robertson. The two men acknowledge they agree on almost nothing - barring the need to deal with global warming.

Other spots will feature the Democratic Speaker of the House of Representatives, Nancy Pelosi, alongside New Gingrich, the conservative Republican who once held the same post.

The support from such conservative figures as Gingrich and Robertson marks a victory for Gore in his efforts to make global warming a cause for all Americans: evangelical Christians and fiscal conservatives as well as those on the left."

It's a smart move at just the right time. Neither Clinton nor Obama can afford not to heed the campaign. It could easily resolve the contest against either of them should they choose to ignore it. However embracing the message will mean presenting some clear and specific policies against which John McCain will be measured.

If, as I suspect, Iraq is in for a dangerous and violent summer, the "surge factor" that McCain has been relying on may present him with a big liability. He too cannot afford to shun a bi-partisan environmental campaign of the sort crafted by Gore.
Posted by The Mound of Sound at 6:52 PM

MOS, it looks we watch the same news - 60 Minutes!