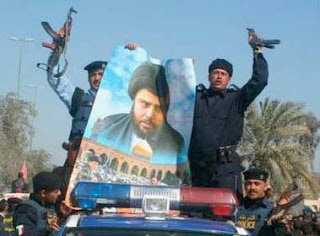 In a few months we should have a good idea of the role Muqtada al Sadr and his Mahdi army intend to play in the American presidential election.

My guess is that, should McCain emerge as a clear favourite, the Shiite militias will take to the streets declaring open season on American forces. There have been recent reports that the Sunni militias, those the Americans armed to take on al-Qaeda, may also be planning to turn on the US forces.

Why? To restore Americans to a state of heightened fatigue to the war without end in Iraq. Neither the Shia nor the Sunni see any long-term advantage in a protracted American presence in their country. The Sunni are worried that the Shiite government and security services are getting too entrenched, backed by the U.S. and Iran alike. The Shia likewise view America's rearming of the Sunni militias with fear and distrust.

A big reason behind John McCain's popularity is a belief that Bush's "surge" is working which leaves Americans feeling more optimistic about the Iraq war. Low US casualty rates have created an illusion of success. McCain's platform of late has been to finish it up and leave victorious.

That impression works for the Iraqis if a Democrat wins, especially Obama. It's in their interests to make conditions seem peaceful enough for a President to get on with extracting American forces.

If, however, they foresee an inevitable battle with American forces, better to engage that sooner when there's time for it to have an adverse impact on McCain before Americans go to the polls.

Iraqis on all sides are watching the rival campaigns unfold and weighing what outcome they want in November and just how to get it.
Posted by The Mound of Sound at 4:18 PM