McCartney One, Mills No Score 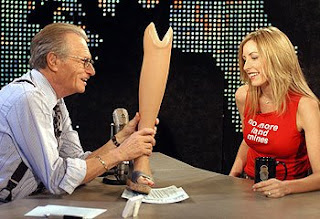 Every now and then a matrimonial case comes along that's worth a giggle, like the guy who bails out on his missus when he discovers he's holding on to a winning lottery ticket. It's good for the soul to see these people get their comeuppance.

And then there's the former Mrs. Paul McCartney, Heather Mills. A brief disclosure - I haven't cared much for Sir Paul since the Beatles broke up but I have a lot of sympathy for him at the moment. For some reason he managed to wed the Shrew from Hell. I'm sure that today he figures the 24-million pounds it cost him to rid himself of Ms. Mills was worth every hapenny.

Mills may have walked away with a tidy fortune, the equivalent of 17-thousand pounds for each day of their marriage, but she wound up leaving any discernable shred of dignity remaining to her on the courthouse floor.

Oh, how the judge, Mr. Justice Bennet, laid into Ms. Mills. He had a lot of trouble with a lot of her claims - well all of them to be accurate. For example, she said she had millions of pounds in savings when she met McCartney yet there was no evidence of any of it in her tax records. She said she gave 80 to 90% of her earnings during coverture to charities but, again, not the slightest sign of that in her tax records - or anywhere else apparently. The judge found that her "tax records disclose no charitable giving at all."

"Having watched and listened to her give evidence, having studied the documents, and having given in her favour every allowance for the enormous strain she must have been under (and in conducting her own case), I am driven to the conclusion that much of her evidence, both written and oral, was not just inconsistent and inaccurate but also less than candid. Overall she was a less than impressive witness.

"If the wife feels aggrieved about what I propose, she only has herself to blame. If, as she has done, a litigant flagrantly over-eggs the pudding and thus deprives the court of any sensible assistance, then he or she is likely to find that the court takes a robust view and drastically prunes the proposed budget.

"She is entitled to feel that she has been ridiculed, even vilified. To some extent she is her own worst enemy. She has an explosive and volatile character. She cannot have done herself any good in the eyes of potential purchasers of her services as a TV presenter, public speaker and a model, by her outbursts in her TV interviews in October and November 2007. Nevertheless, the fact is that at present she is at a disadvantage. The wife would say she is at a severe disadvantage. I think she overplays her hand."

"In my judgement the picture painted by the husband of the wife's part in his emotional and professional life is much closer to reality than the wife's account. The wife, as the husband said, enjoys being the centre of attention. Her presence on his tours came about because she loved the husband, enjoyed being there and because she thoroughly enjoyed the media and public attention. I am prepared to accept that her presence was emotionally supportive to him but to suggest that in some way she was his 'business partner' is, I am sorry to have to say, make-belief.

"I have to say that the wife's evidence that in some way she was the husband's 'psychologist', even allowing for hyperbole, is typical of her make-belief."

I do pity Mills but I have no sympathy for the situation she's placed herself in - because she did this to herself, all by herself. She tried to use McCartney's reputation to manipulate him and to his credit he stood his ground as she repeatedly and unrelentingly defamed him.

Worst Woman In The World - Heather Mills.
Posted by The Mound of Sound at 10:41 AM