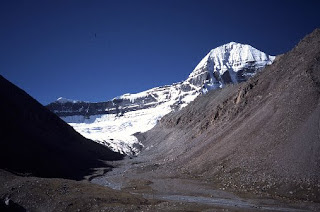 This might not be a good time to complain about melting to those of you shovelling snow from your roofs back East but - can't be helped.

Contrary to the nonsense being spun by the hoax climate (i.e. denialist) industry, the world's glaciers are melting faster than ever.

The outfit that knows is aptly called the World Glacier Monitoring Service. As its name suggests, it keeps tabs on glaciers around the world and it's not in the business of creating smokescreens for the fossil fuel industry.

The latest WGMS report says the world's glaciers are melting faster than at any time in the past 5,000 years. From The Guardian:

"Based on historical records and other evidence, the rate at which the glaciers are melting is also thought to be faster that at any time in the past 5,000 years, said Professor Wilfried Haeberli, director of the monitoring service. 'There's no absolute proof, but nevertheless the evidence is strong: this is really extraordinary.'

Lester Brown, of the influential US-based Earth Policy Institute, said the problem would have global ramifications, as farmers in China and India struggled to irrigate their crops.
'This is the biggest predictable effect on food security in history as far as I know,' said Brown."

The Himalayan glaciers feed the main rivers of both India and China, providing water essential for agriculture in those massively populated nations. The loss of these glaciers is expected to turn the once mighty Ganges into a seasonal river, dry except during the monsoon season when water isn't needed for irrigation anyway. The same situation could afflict major agricultural areas of China also.

It's not just people and rice paddies and wheat fields that need reliable volumes of water. Industry consumes enormous amounts of water and both China and India are moving to industrialize on a massive scale that will only compound their water needs just when those resources are becoming unstable.

Before long, water may be the new oil. Maybe then those of us in coastal British Columbia will stop whining so much about it.
Posted by The Mound of Sound at 8:20 AM

Sorry PreSchool but your right-wing, denial agit-prop has been binned. I already mentioned this post wasn't for you hoaxters so get lost chump.

Seems to me you are just another closed-minded Progressive . . .
5 years from now I will remind you of all the GW nonsense you have spewed . . . Hanson's predictions of a decade ago are now laughable . . . compter models are nonsense . . . you and your ilk will look like the kooks of the 70's that forcast the end of life as we know it.

Benttool, look, I'd be delighted if you would stick with your idea about coming back five years from now to remind me of all the GW nonsense I've spewed. Five years sounds about right. Now, if you want a forum for your fantasy drivel, get off your lazy ass and set up your own blog. You're not welcome on this one.

Ah, I love these Liberal blogs...they're so welcoming.

Sorry to disappoint, Anon. You plainly think it appropriate that I furnish a forum for the ignorant to use as a soapbox to spread ignorance. They don't need this blog to accomplish that. I feel these types are corrosive to our society and the future generations so I choose, as is my right, to trash them. If you have trouble understanding that, tough. Being Liberal doesn't mean furnishing a forum for the dissemination of crap even if it is right-wing.