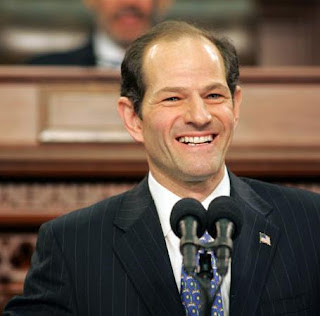 The New York Times reports that Eliot Spitzer has informed his senior aides of this and has scheduled a press conference this afternoon to reveal all.

"Mr. Spitzer gained national attention when he served as attorney general with his relentless pursuit of Wall Street wrongdoing. As attorney general, he also had prosecuted at least two prostitution rings as head of the state’s organized crime task force.

In one such case in 2004, Mr. Spitzer spoke with revulsion and anger after announcing the arrest of 16 people for operating a high-end prostitution ring out of Staten Island."
Posted by The Mound of Sound at 11:08 AM

So, Spitzer conducted an fair exchange of money for services in which no one was harmed and both parties got something they valued?

Gosh, what a horrible man.

Not like Dubya who lied the US into war and killed millions. Not like Larry Craig who cruised bathrooms even while oppressing gays. Or Mark Foley who had a penchant for teen aged boys under his authority...

Yep, that spitzer is a real bad person....

If that was what he did, Mike. I think he's his own worst enemy. When you hold yourself out as the ultimate Mr. Clean, you're leading with your chin.

According to the article I read, in 2004, he was part of an investigation into a prostitution ring that lead to the arrest of 18 people.

It's not so much the solicitation of prostitution that bothers me (at least not in this case), it's the hypocrisy.

"When you hold yourself out as the ultimate Mr. Clean, you're leading with your chin."

Oh I agree, but in the big picture, not worth the pearl clutching and hand waving from the church ladies over this, not when they made all kinds of excuses for Larry Craig and a certain meth using boy-toy from Colorado...

Ah Mike, ever the romantic! Trust you to rekindle those warm memories of meth using boy-toys from Colorado. Sigh.

All part of the service I offer...