A Failing Strategy in the War on Drugs 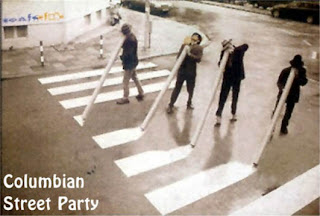 The United Nations International Narcotics Control Board releases its annual report today warning that major drug cartels are operating with virtual impunity because nations are wasting their efforts focusing on small-time users instead.

"According to the 127-page annual report from the UN's International Narcotics Control Board (INCB), governments need to make greater efforts to freeze traffickers' assets, improve access to drug treatment programmes and expand the range of non-custodial sentences available for convicted users.
The main findings were:

The emergence of new smuggling routes, in particular cocaine from South America being stockpiled and repackaged in west Africa before entering Europe.

Increased cultivation of coca bushes - from which cocaine is derived - in Peru and Bolivia as crop eradication programmes reduce production in Colombia.

A 17% increase in illicit opium poppy cultivation during 2007 in Afghanistan. The country now accounts for 93% of the global market in opiates.

It added: "Some countries still spend disproportionate effort in targeting low-level offenders and drug users, as compared to the more pressing issues of identifying, dismantling and punishing those who control or organise major drug trafficking activities.

"Many states impose unconditional imprisonment of drug abusers for lesser offences, such as possession or purchase of drugs for personal use and these typically make up a significant proportion of growing prison populations in some countries. There is no universal 'moral instinct' when it comes to punishment for less serious cases."

The report does, however, criticize countries that condone drug use of any form, including medical marijuana. Canada is specifically mentioned for providing "safer crack kits" which, I have to admit, I know absolutely nothing about.

The UN Drug Czar, whose name escapes me at the moment, is fiercely opposed to any and all forms of drug use and production regardless of the circumstances. In Afghanistan, for example, he wants the entire opium crop wiped out immediately without the slightest regard to the implications that might have for the counterinsurgency war being waged. It's that lack of realism and inflexibility that probably ensures this report will be left to gather dust.
Posted by The Mound of Sound at 8:05 AM

Email ThisBlogThis!Share to TwitterShare to FacebookShare to Pinterest
Labels: war on drugs