Siegelman Out on Bond 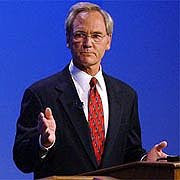 Former Alabama governor Don Siegelman has been released from prison where he was serving time for supposed bribery. A Federal Appeals Court ordered his release saying there were legitimate questions about the case.
The Siegelman case has become widely celebrated as an example of Republican abuse of justice in Alabama. When 60 Minutes recently aired an expose on Siegelman, the network's affiliate in northern Alabama went off the air, claiming it had experienced a technical failure with the network.
Karl Rove has been linked to the effort to railroad Siegelman.
Posted by The Mound of Sound at 11:16 AM