And He Was Expecting - What? 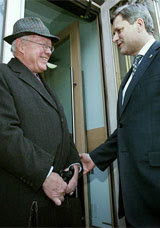 Retired Justice John Gomery showed up before a Commons committee today to whine that Harpo has completely ignored his report on restoring government accountability issued in the wake of his enquiry into the sponsorship scandal.

At the time, when Gomery was doing everything possible to help Harpo into power, our Furious Leader rubbed his back, patted his judicial bum and assured Gomery that he, Harpo, would clean house once he got the reins of power.

SURPRISE! Just kidding. C'mon you really didn't believe that nonsense, did you? Did you? Accountability? Ha, in a pig's eye!

"I am disappointed. I find it hard to swallow," he told the Commons government operations committee, which is reviewing the Conservative's handling of his report.

"I gave them two years, I thought it would give them the time to do something."

Well, best you learn how to swallow harder, Johnny. You were had. The Canadian people were had.

Gomery told his undoubtedly rapt audience that the growing, centralized power in Harpo's PMO is a "danger to Canadian democracy" and paves the way to political interference in public administration.

But what's wrong with Rule by Political Commissars? You know, those faceless insiders who keep the gags firmly on outfits like the Department of National Defence and Environment Canada, Harpo's aides who keep the curtains so tightly drawn lest the Canadian people get a glimpse of what the inside really looks like.

Gee, John, does this mean no more congratulatory photo ops with Stephen Harper? I'll bet you feel like a real tool now, don't ya? That's because you were a tool and a very handy one at the time.
Posted by The Mound of Sound at 10:08 AM