Another Trace of D.B. Cooper? 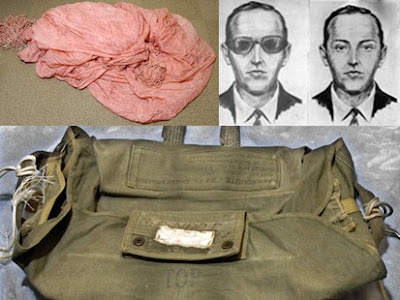 It's been almost 20-years since a young boy found $5,800 of D.B. Cooper's stash of twenty dollar bills decomposing along the banks of the Columbia River. The bills were determined to be part of the $200,000 Northwest Orient Airlines gave Cooper after he hijacked their plane on a hop from Portland, Oregon to Seattle in November, 1971. Cooper also demanded, and got, four parachutes after threatening to blow up the plane.

Somewhere over the Pacific Northwest, Cooper put on one of the parachutes, took the money and walked off the plane's rear ramp into a raging storm. It's been widely believed that Cooper didn't survive the jump. Now it seems he might just have made it after all.

The FBI is now conducting forensic tests on a parachute discovered by some kids two weeks ago in a field 100-miles south of Seattle. The chute had been buried in the dirt. The FBI has confirmed that the field was on the flightpath taken when Cooper jumped.
Posted by The Mound of Sound at 9:56 PM

I wonder if they'll ever figure out who he was.

Assuming he survived the jump. If he was an adult during the 70s he must be getting pretty close to death by now (just pulling your chain Mound). :-)

Pretty close to death, eh? Listen, Fish, keep running your mouth and you'll never live long enough to spend the night with a girl you haven't had to pay!

See how clever your elders (make that betters) can be?

Close to death. Hmmm. That one will stick for a while.

Sorry 'bout that one man, I couldn't resist!

I was having breakfast at Father & Sons this morning and I guess I spent a little too much time thinking about how to do a little shit disturbing!