The Guardian is Going Straight to Hell 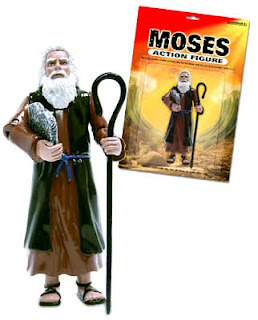 They've really done it this time. The Guardian has shown itself delightfully blasphemous in an article today suggesting that Moses (the one and only) was stoned out of his gourd when he went up Mount Sinai and received the Ten Commandments:

An Israeli researcher is claiming in a study published this week the prophet may have been stoned when he set the Ten Commandments in stone.

According to Benny Shanon, a professor of cognitive psychology at the Hebrew University of Jerusalem, psychedelic drugs formed an integral part of the religious rites of Israelites in biblical times.

Writing in the Time and Mind journal of philosophy, he says concoctions based on the bark of the acacia tree, frequently mentioned in the Old Testament, contain the same molecules as those found in plants from which the powerful Amazonian hallucinogenic brew ayahuasca is prepared.

"The thunder, lightning and blaring of a trumpet which the Book of Exodus says emanated from Mount Sinai could just have been the imaginings of a people in an altered state of awareness," writes Shanon. "In advanced forms of ayahuasca inebriation, the seeing of light is accompanied by profound religious and spiritual feelings."

References in the Bible where people "see" sounds, is another "classic phenomenon", he said, citing the example of religious ceremonies in the Amazon in which drugs are used that induce people to "see" music.

http://www.guardian.co.uk/world/2008/mar/05/religion.israelandthepalestinians
Posted by The Mound of Sound at 9:09 AM

I just realized the paper might have achieved a "first" - offending Muslims, Jews AND Christians all with just one story.

I dunno, the Bible makes a lot more sense when read as a work by Hunter S Thompson...

Hey Mike! I thought you might take the bait on this one. Now, where's Red Tory?

Know something Mikey boy? It's sunny out here and I'm going for a nice ride on my motorcicle! I guess there's not a lot of biking rght now in Ottawa, eh amigo?

sorry, it's the silly season out here when we can't resist rubbing it in to the Rest of Canada.
cheers

Religion is one big hallucination. Cheers