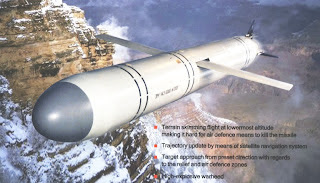 Russia built them, China has them and Iran may have them soon.

The Sizzler, Russia's new anti-ship missile is said to be the best in the world and it's got the US Navy flummoxed.

"This is a carrier-destroying weapon,'' said Orville Hanson, who evaluated weapons systems for 38 years with the Navy. "That's its purpose.''
"Take out the carriers'' and China" can walk into Taiwan,'' he said. China bought the missiles in 2002 along with eight diesel submarines designed to fire it, according to Office of Naval Intelligence spokesman Robert Althage.

If Iran does get its hands on the Sizzler it could feasibly lock down the Persian Gulf and disrupt the world's oil supply.
Posted by The Mound of Sound at 12:59 PM

The only combat suite believed to be capable of surviving a Sizzler raid is the PAAMS(S) that has been built into the new RN Type 45's.

The American AEGIS system is known to be lacking. The Canadian ships are quite hopeless.

Ed, any word on whether these things are reaching Iran?

Yes, Iran stocks them. They have a supply of (although I can't be sure how many) the Klub-S. That is the submarine launch variant that is fired from the Iranian Kilo class boats (of which they have 6).

Reaching Iran? They are already there.

Did Iran get those from Russia or China? There've also been rumours of Iran getting the latest Russian mobile SAM systems.
I don't know what the lifespan of a Kilo would be if an American fleet carrier battle group was after it. I suppose the USN would have one or more SSNs on station in the Gulf to keep them in check, no?

Did Iran get those from Russia or China?

I can't find a reference but I am pretty certain it was Russia in an oil deal. But don't quote me.

I don't know what the lifespan of a Kilo would be if an American fleet carrier battle group was after it. I suppose the USN would have one or more SSNs on station in the Gulf to keep them in check, no?

The Kilos are Diesel Electric and can hide better than most submarines. However, the USN (and NATO for the most part) has started to talk about the Tomahawk as the best ASW weapon. Destroy the home base with cruise missiles and the subs are rendered helpless. The USN has thousands of Tomahawks at the ready in Gulf. Add in the Air Force and their strike weapons and the Kilo bases could be leveled in the first few hours.

Although that still leaves a at least one Kilo on patrol, armed with a Sizzler, looking for revenge. Perhaps that is an acceptable loss in the eyes of the USN.