McCain - Talkin' the Talk and then Walking Away 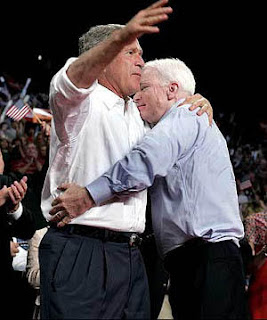 John McCain wants voters to believe he's a true champion of the environment. That's what he says. What he does - that's a different story.

When tough environmental initiatives come to a vote in the US Senate, you can count on John McCain to be - well, to be absent. From The Guardian:

"Twice in the last three months, the US Senate has come within one vote of overturning $1.7bn in tax benefits for oil companies and using the money to promote renewable energy. Both times, McCain has skipped the vote, effectively killing the proposal and alarming leading green groups.

"McCain also was a no-show during controversial votes on subsidising the conversion of oil to "clean" coal and relaxing rules for oil refineries.

"When the League of Conservation Voters (LCV) released its annual environmental rankings last month, McCain - whose campaign website declares him "a leader on the issue of global warming" - earned a zero for missing all of the group's votes on key green issues. He was one of nine Republicans scoring the lowest possible rating."

The Sierra Club and other environmental groups intend to publicize McCain's environmental voting record in the runup to the November elections. From his embrace of Christian fundamentalism to his call for even more deregulation of the financial sector to his insistence on keeping the Iraq War on the front burner, John McCain is showing the world that there's a lot more to him and a lot less to him than he'd like you to believe.
Posted by The Mound of Sound at 9:04 AM

The nerve of Mr. McCain . . . not showing up for an important vote. That just goes to show that people who don't have the guts to show up and express their views are two-faced.

Oh yeah, Liberal MP's are doing exactly what you accuse McCain of doing.

I can't argue with you on that one. I'm sure not happy with what's been going on.