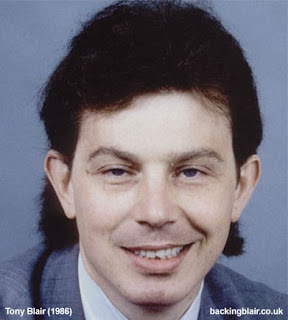 Tony wants to be loved. He wants to be valued and respected and hoisted up on some sort of international pedestal.

When he finally got his marching papers from No. 10 Downing Street, Blair fashioned himself into some "super envoy" who would do what none had done before him, make peace between the Palestinians and Israel.

That hasn't exactly worked out, has it?

Now Tony wants to save the planet. That's better than Palestine, right? Better even that the whole EU, right? Yes, the planet. There's something fitting to a man of Tony's experience and accomplishments. Just the ticket.

According to The Guardian, "Tony Blair.. ..plans to publish a report over the next year that could form the basis for what he described as a proper global deal to combat the biggest threat facing the world.

Explaining his thinking, Blair said: "Essentially what everyone has agreed is that it is a serious problem, it is man-made, we require a global deal that there should be a substantial cut in emissions at the heart of it, and this global deal should involve everyone, including in particular America on the one hand and China on the other, so it is the developed and developing world.

"The question is: what is the framework that gets everyone in the deal that has obligations all around, even if they are different obligations, and results therefore in a chance of reaching that substantial cut in emissions? So the task is both to specify finally what we mean by a substantial cut in emissions to get a clear global deal, but also to set out the framework.

"The problem is that you could work out what you are going do, and what the Europeans are going to do, but it seems far more difficult to see how you put the whole thing together, so that you have a true and proper global deal."

He said that the initiative "arose out of my experience in office. We got a long way from 2005 to the 2007 G8 summit in Germany, when people - including the Americans - finally agreed there had to be a new global deal, and everyone had to be part of it, and there had to be a substantial global cut in emissions.

"But we have not decided the target, or the means by which we are going to give effect to those common but differentiated obligations. There will be an insistence that everyone has to be part of the deal."

"I can give this some realistic political guidance, and I am not going to come up with something that I myself would have rejected when I was sitting round the table. There is no point producing something that is not politically doable. It may be politically challenging but that is a different thing."

Can Blair really make the difference he believes he can? I hope so but I think he left his credibility to drain away into the sands of Iraq. He sure hasn't made a difference in the Middle East and a lot of Europeans don't think much of George Bush's sock puppet. He's an enthusiastic little shit though, isn't he? Annoying, but enthusiastic. You have to give him that much.
Posted by The Mound of Sound at 8:58 AM

Tony’s quest for redemption and relevance is endearing in some ways, but his credibility is so strained at this point that it’s hard to understand why he bothers.

Maybe if he just went back to the mullet?