Maybe He Should Give Bush a Medal 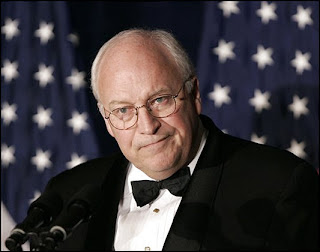 According to Dick Cheney, the greatest burden of the Iraq War isn't being carried by those soldiers now enduring their fourth combat tours in that hellhole. It isn't by those who find themselves trapped beyond their enlistments thanks to the military's "stop loss" policy. No, the real burden is being carried by President Bush.

"The president carries the biggest burden, obviously," Cheney said. "He's the one who has to make the decision to commit young Americans, but we are fortunate to have a group of men and women, the all-volunteer force, who voluntarily put on the uniform and go in harm's way for the rest of us."

There are no words to describe how vile this creature is. Dick Cheney knows a lot about fighting. He fought to bag five draft deferments during the Vietnam War to keep his ass safely at home while others went off to do his share of the fighting. This man is the poster boy of Chickenhawks. It's no wonder he has no idea, none, of the burden his country's trapped soldiers are truly bearing.
Posted by The Mound of Sound at 10:32 AM

By the way "So!" was joke about Dick Cheney. I was not questioning you.