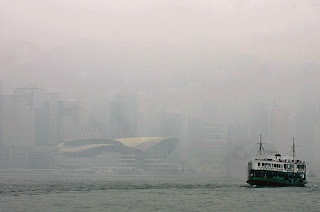 Reuters news service reports that studies undertaken by researchers from the University of California found that Chinese GHG emissions are set to grow at least 11% annually from 2004 to 2010, not the more benign 2.5 to 5% estimated by the Intergovernmental Panel on Climate Change (IPCC).

Environment ministers from the world's 20-top emitters are scheduled to meet on Friday in Japan. These 20-nations produce 80% of the planet's total GHG emissions.

The UC Berkley report indicates Chinese emissions will have grown by 600-million metric tons by 2010 which vastly eclipses the 116-million metric ton reductions targeted in the first phase of the Kyoto Accords.

"It had been expected that the efficiency of China's power generation would continue to improve as per-capita income increased, slowing down the rate of CO2 emissions growth," said Maximillian Auffhammer, UC Berkeley assistant professor of agricultural and resource economics.

"What we're finding instead is that the emissions growth rate is surpassing our worst expectations, and that means the goal of stabilizing atmospheric CO2 is going to be much, much harder to achieve."

This report isn't an anti-Chinese smear job either. The calculations were based on pollution data from 30 Chinese provinces and China's official waste gas emissions data.

So, the climb just got one helluva lot steeper and the lesson is that something effective has to be up and running very, very soon.
Posted by The Mound of Sound at 11:28 AM