Enough Is Enough, Except When It's Not 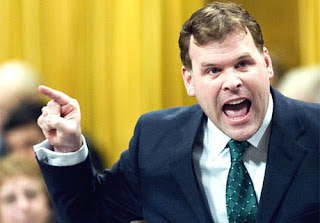 Harpo EnviroMin John Baird is a huckster, a dabbler in the Dark Arts, a master of sleight-of-hand. Well, maybe not exactly a master because he and SHarper have tried to con us twice and it hasn't worked but you have to give him full points for trying.

That's why Bairdo is now talking tough on the Athabasca Tar Sands, or at least future projects which, he promises, will have to achieve unattainable targets using nonexistant technologies that we've been told for a decade are just around the corner. Our Furious Leader's 800-pound gorilla (and he really does look like one) beats his chest, bares his fangs in anguished roars and flings dung about his cage proclaiming loudly that they'll do better next time or, if not, then the time after that, or the one after that, or sooner or later or eventually, maybe.

It's all show. Really, it's all for worrywart voters. "Look mom", he proclaims, reaching deep into his diapers, "look what I've made for you!" Sorry for all the scatalogical references but it's a preposterously scatalogical plan.

It's designed to showcase initiatives; bright, shiny, sparkling distractions; not to achieve a meaningful reduction in our nation's GHG emissions. If he wanted to do what really matters, Baird would be showcasing something other than fanciful ideas - he'd be defining limits, hard caps on greenhouse gas emissions.

Why are the Tories so afraid of greenhouse gas emission caps? It's obvious when you think about it. It's because it would mean carbon rationing, allocation of a national, total maximum permissible carbon emission quota, and how else can you carve up something you've rationed except on a per capita basis? Why should a guy from Ontario be limited to X-tonnes of GHG emissions when a guy from Alberta gets 4X? If we're all going to have to sacrifice, shouldn't we all bear the same sacrifice? Of course we should, it's the quintessential Canadian way, rien?

You see, once you set hard caps, emissions = money and potentially big money. Alberta doesn't want to share its good fortune, it's petro-wealth, but it sure wants you to share it's petro-dirt. Whatever limits are set, it wants your province not it's own to bear the disproportionate burden, to carry the environmental cost of its wildly lucrative Tar Sands.
Worse yet, is what the idea of carbon rationing on an equitable, per capita rationale would or could lead to. Why, if we entertained such revolutionary thinking at home, how would we begin to refute the Chinese and the Indian claims for similar, per capita quotas? What might begin in Athabasca could wind up undoing the entire New World Order.

That's why Bairdo is cavorting about promising to "do better" because what's he really trying to do is to keep the same shell game going for just as long as he and our Furious Leader can get away with it.

I hope I've given you something to think about, a fresh way of looking at exactly what lies behind the Tories environmental scheming. Harpo, Bairdo and the rest of them are cheap shills for Big Oil and the sooner we see that plain reality, the sooner we'll find a way of dealing with this problem.
Posted by The Mound of Sound at 9:21 AM

Its a slow process, too slow for you. You'd like environmental clean up to happen now but it cant. Its now been 15 years of inaction...13 years under a Liberal govt and now 2 years under a Conservative govt...if its not crystal clear to you that cleaning up this mess will take 20 to 30 years I'm not sure it will ever be clear to you. Blaming Baird and the Conservatives is laughable when you know in your heart and head that a Dion led govt would have the same issues and make the same decission's. billg

John Baird is a lying sakc of crap that needs a good smack in the head. And anyone that continues the "13 years" horseshit is also a liar and needs a smack too.

Like you billg. Now shut the hell up and get the CPC to actually DO something.

Mike you blathering moron. The point was and still is, and, the point will be that there is a reason why the environmental issue moves so slow. It moved slow for the Liberals, it has moved slowly for the Conservatives, and, if Mr Dion becomes PM it will move slowly for him as well, and its because of the adverse effects on the economy. Mr McGuinty has steadfastly rejected calls for re-tooling industry in Ontario to meet unrealistic environmental demands. Ontario still has coal fired electric plants even though he promised to have them all shut down by 2009, your plain stupid if you dont think it will be another 15 years before Ontario can shut them all down. Mike, unless its your first day...they all lie, they have to, why?, for partisans idiots like you, who cheer a green scarf, vote and sigh a sigh thinking everything is ok. For both the Libs and Cons, the economy trumps the environment, anything else is political suicide. billg

The point is, BillG, that we can't afford the "go slow/no go" policies of the past any longer. Those days are gone. We know that we're already emitting far too much GHG - per capita. That means we have to set targets and, when you're already over the line, targets have to come in the form of limits.

Now, limits are a form of rationing even if you manage to avoid using the "R" word. You get so much and that's it. Once you're past that, other measures come into play.

Once you get to that point you're implicitly saying that a certain quantity of GHG is permissible and so how is that to be allocated? For starters, it has to be allocated equitably - fairly - and that means a per capita formula. Ontario and Quebec won't tolerate anything else nor should they.

You have to begin with caps because that's the backbone of any effective, GHG emissions control policy. By its very nature, a hard-cap will prescribe the technologies that are necessary for compliance instead of the other way around - a patchwork system of exceptions that will be all but impossible to monitor and regulate. That merely ensures the sort of knuckle-dragging that Harpo/Bairdo use to con the Canadian people.

And, Bill, Mike's right. That 13-years of inaction is a palpable lie that's only around to provide a bulwark for Tory inaction.

Let's leave that aside because it's nothing more than a counterproductive distraction. The time for those smokescreens is over, gone.

If that's the point you want to make, make it. "13 years" is just political propaganda and spin, designed to maximize Liberal malfeasances (13years of inaction!) and minimize Conservative responsibility (only two years to do something...compared to 13 years!! of inaction).

Frankly Bill I would back some measures that would quickly help the environment that a supposed conservative should also back - removal of all government subsidies and tax deferments to the oil and gas industry. Make them pay the real costs of the Tar sands and other developments, rather than externalizing that cost to the taxpayer. If that drives the price of gas up, good, only that will encourage people to use less oil and gas (thus reducing emissions from them). That will in turn make alternative sources more economically feasible and drive R&D into them, making them more and more viable. Thus reducing emissions.

I would also ditch the idiotic regulations that make it so that Quebec Car maker Zenn can't sell electric cars in Canada!

There are hundreds of "conservative" measures that could be taken such as those I mentioned above that could have a very big, immediate impact.

If the CPC weren't beholden to the oil patch corporations and the anti-science crowd, maybe they would choose to do them.

Take some personal responsibilities and stop blaming the Liberals.

I mentioned the 13 years Mound because, if the environment is your number one issue then vote NDP or Green, because the 2 major political party's in this country will not and cannot trump the environment issue over any economic policy. If you actually believe that then your extremely foolish. I could care less about the environmental history of the Liberals...surplus after surplus and still no managable way to control GHG emissions without impacting our economy, I'm not bashing them I'm congratulating them. You want rash and rushed implimentation of GHG caps then vote NDP...you want balanced and a fair system vote Liberal or Conservative. And here's the real kicker..one of the main reasons the Liberal Party of Canada has backed off Kyoto and its environmental stand is, that if they ever get elected and fail on Kyoto or fail on a workable cap system (which they will because its not do-able) they will render themselves as a fringe party for a long time. Is John Baird lying through his teeth? Probably. I'm a Conservative supporter and even I can see that. But what I'm asking is..if this is so important to you how on earth could you support a party that you know full well will treat this issue exactly the same as the Conservatives? And Mike...I've never blamed the Liberals for their inaction on the environment...I thought they showed amazing responsibility to the Canadian economy. Isnt that why you voted for them time and again? billg

Good points Mike. Why is it that RepubliCons are so invested in Big Oil? I don't understand the need for Canadian subsidies and deferments for petroleum production that is destined for export anyway. Why should Canada subsidize American oil? I assume there's some logic to it, at some level, that simply escapes me.

BTW - What is the latest on the Zenn car?

"Isnt that why you voted for them time and again? billg"

I've never voted Liberal in my life. In fact, as a libertarian, I won't vote for any of them. Merely pointing out that the "13 years" meme is BS. Nice try to move the goal posts.

The Conservatives aren't doing anything because they don't want to do anything. Its just that simple. They like subsidies and tax deferments (about $1.3 billion per year, if memory serves, for about the last 9 years, so the Libs are guilty too) going to their Alberta business supporters. Other wise they would have done something.

They have done nothing and its nobody else's fault but theirs - John Baird and the CPC.

I still can't buy one, even though they are manufactured a few hundred KM away. So, nothing really....

rushed and rash? That is the biggest excuse from the people at the top, the ones who are making money off polluting this planet. After they get their pound of flesh everyone else can then suck on it and fend for themselves. Ah capitalism - not a way to run a government.

Holy frig N....then come up with a better way. The Libs or the NDP should come up with a better way.
Its my whole friggin point...if there was a better way and a quicker way dont you think it would have surfaced by now?? Our democratic system means that if you have bigger and better ideas then the other guy you get to govern....so...come up with bigger and better ideas, or, get your political party to do it, hell, they'll get my vote...clean the air, capture GHG's and at the same time create jobs...seems like a no brainer to me. billg