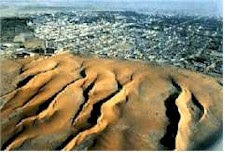 Top European Union officials are warning of a massive migration out of the developing world caused by global warming.

Within a decade they forecast that the advantaged countries will have to cope with millions of what they term "environmental migrants." From The Guardian:

They point out that some countries already badly hit by global warming are demanding that the new phenomenon be recognised internationally as a valid reason for migration.

The immigration alert is but one of seven "threats" that the two officials focus on in pointing to the security implications and the dangers to European interests thrown up by climate change.

The main message is that the immediate and devastating effects of global warming will be felt far away from Europe, with the poor suffering disproportionately in south Asia, the Middle East, central Asia, Africa and Latin America, but that Europe will ultimately bear the consequences.
This could be in the form of mass migration, destabilisation of parts of the world vital to European security, radicalisation of politics and populations, north-south conflict because of the perceived injustice of the causes and effects of global warming, famines caused by arable land loss, wars over water, energy, and other natural resources.

"Reduction of arable land, widespread shortage of water, diminishing food and fish stocks, increased flooding and prolonged droughts are already happening in many parts of the world." Fresh water availability could fall by up to 30% in some regions, causing farming losses, surging food prices and shortages, and civil unrest. "Climate change will fuel existing conflicts over depleting resources."

This isn't the stuff of some Mad Max movie. It's real, it's deadly serious and it's already happening. Anyone who believes Canadians will remain immune to this is an idiot. We need to begin discussing what this problem means - for the world and for us - and how to address it. Sadly with Harpo at the helm and Baird on the bailing bucket, we're not in for a great ride.

http://www.guardian.co.uk/environment/2008/mar/10/climatechange.eu
Posted by The Mound of Sound at 11:17 PM

Strengthen the navy so we can turn them away.

It will take an awful lot more than a strong navy to deal with these problems. In any case these are problems that are better confronted where they begin that left to build until we have to deal with them at our own doorstep. The radicalism threat is really beginning to emerge at the moment. We see false hope of security in maintaining strongman rule in troubled regions. That is going to backfire on us in the coming decade or two.