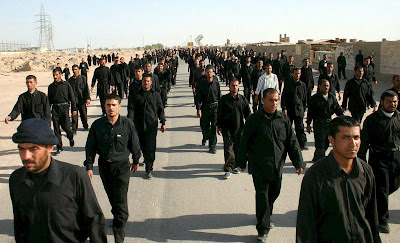 Nouri al-Maliki may just have transformed a troublesome militia into Iraq's own Viet Cong. It's the Mahdi Army of Muqtada al Sadr, an outfit that's making effective use of the most potent guerrilla tactics to grind down the numerically and technologically dominant Iraq Army.


Whereas the Viet Cong used the jungles, waterways, backroads and even networks of tunnels to wage their war against the South Vietnamese and American forces, the Mahdi Army operates in its own jungle, the congested slums of Iraq's key cities and their intricate mazes of alleys where tanks can't reach and fighting is one-on-one.

James Glanz wrote a brilliant article in yesterday's New York Times in which he explains why this latest war, pitting Shiite against Shiite, is different and may just be the undoing of the Maliki government. This isn't about resisting the occupiers. It's about dethroning the Baghdad government and, in this fight, time is not on Maliki's side.

Glanz writes that this battle, this war, bears an eerie resemblance to a recurring dream he developed in his four years covering Iraq:

"Here is what happens in the dream: Because I know a little Arabic, I somehow find myself a translator for the invaders, even as some of my Chicago buddies are in the alleys plotting against my employers. And each night when I walk home along my beloved Dearborn Street under the rusty elevated tracks and past the White Hen grocery store, I wonder what the guys poring over maps in their armored vehicles plan to accomplish against a few million South Siders fighting in their own alleys. That’s usually when I wake up.

That dream, a nightmare, really, flashed through my mind as I stood at the end of a filthy, pothole-riddled alley talking with a small-time deputy commander in the Mahdi Army, the militia that is the armed wing of Mr. Sadr’s political movement. Standing there with his arms folded over his potbelly as his fighters scurried about behind him, the man who called himself Riadh, 34 years old, was effectively deputy commander of an alley.

“We can’t face the armored tanks of the Americans face to face, because all we have is light guns,” he said. “So we just wait for a chance to attack something.”

Alleys: they are dangerous only when used by those who grew up in them. That is the basic reason Mr. Sadr and his fighters simply will not go away in this war.

What makes the case so difficult is that it is not just a question of a battle with American troops, here from half a world away carrying out operations that Mr. Sadr and his fighters consider an abhorrent occupation. Some 3,500 troops in the Basra fight are Iraqis from outside the province, and witnesses say it is clear that few if any of the Iraqi security forces in the assault know the neighborhoods the way the Mahdi Army does. Its fighters literally pop in and out of alleys, battling a federal force of nearly 30,000 to what is, so far, a stalemate.

No one has ever accused Mr. Sadr of being brilliant, charismatic, or even above average in the intellectual realm. But he has one thing few of those leaders have: he never left, even in the worst years of Saddam Hussein. And that does not just give him credibility on the streets. In a country where sheer social, religious, political, historical, geographic and psychological complexities are what seem to defeat all easy solutions, Mr. Sadr is one of the few who have been here continuously, absorbing the shifting lessons of the place. He has done his homework, he has put in his time.

As I sit here writing this piece, listening to the intermittent whooshes and booms of rockets and mortars fired into the Green Zone, almost certainly by Mr. Sadr’s fighters, I can no more predict where the conflict is headed than I can say what will be in my dreams tonight during the few hours of sleep that this war and my editors allow me. But when it comes to Mr. Sadr’s loyalists in the alleys of Basra and Baghdad, one thing is irrefutable.

In those alleys, waking up will not end the dream."

Glanz has filed a piece in today's NYT, in which he reports that the Mahdi Army has consolidated control of at least half and, by some accounts, possibly much more of Basra, taking over police stations and establishing roadblocks.

Maliki's weakening has been dramatic. From beginning with a "surrender or die" edict, he switched to a 72-hour amnesty for surrender and then extending that by a further week and offering to pay rewards for those who turn in their guns. That doesn't sound like a guy who figures he's winning this battle. It sounds like someone who is very worried about his own ability to survive the conflict.
Posted by The Mound of Sound at 7:39 AM