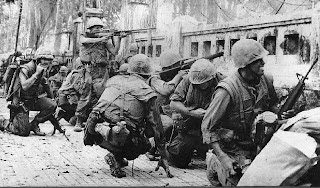 There are a few things that the Sunni and Shiite militias in Iraq want from the United States. There's really only one thing they both want, and that's the withdrawal of American forces from their country. A window of opportunity is about to open for them.

Both sides are well armed. The Shia militias have stockpiled the endless thousands of weapons "liberated" from American arsenals, including Abu Ghraib. The Sunni have been equipped by the Americans voluntarily so that they could fight the al-Qaeda terrorist movement.

Muqtada al Sadr's Mahdi army is well rested, having had the past six months to recruit, train, organize and deploy under the guise of a ceasefire that has just been extended by the boss. al Sadr's men are also believed to have widely infiltrated the Iraqi security and police forces. The Sunnis haven't had the luxury of a six month leave but they have been getting a lot of "on the job" training in tactics and the use of their new American toys.

Both sides have learned that, for America, even the most powerful foreign policy is vulnerable at home, at the ballot box. If the American people dislike something enough, those who court their favour will, even if reluctantly, agree to do their bidding. That's raw, ballot box democracy.

So for Iraq's armed and ready militias, the trick is to shape American public opinion in the runup to November's elections. After the next president is decided, their leverage plummets. They need to strike while their influence is strongest. Just when will that be?

In order to decide what to do, the Iraqis need to have a good idea who's likely to win the White House in November. They need to know who will be the Democratic candidate and how likely that person is to prevail over Republican John McCain. The better McCain's chances the more aggressively they'll have to act.

Polls have shown that the American people believe the surge has worked. As violence has fallen, particularly in Baghdad, American approval ratings for this war rose steadily. It's still, on balance, an unpopular war but McCain holds out the promise that, with a new commander in chief, him, this can be turned around, victory can be won and the country spared the ignominy of another Vietnam.

McCain is counting on the improvement in those approval numbers. Without them the Republicans would have been less willing to nominate a war hawk (although they weren't given many options among their candidates). We've already seen, however, that popular support for the Iraq debacle is soft. As violence spikes it evaporates, ebbing until it reaches the hard-right floor.

But what of the Dems? The militias will also be looking closely at them. If somebody comes out of the Clinton-Obama knife fight not too badly wounded and there's reason to believe the Democratic nominee will trounce McCain, then a much different set of considerations arises.

The less violence there is in Iraq, the easier it could be for a Democratic president to declare victory and pull out America's troops. It's a gamble but I think the militias just might choose to lay low if the Dems offer a realistic prospect of a timely American withdrawal.

If, however, McCain seems to be winning or it really is too close to call, the pre-election runup will be the militias' last best chance to influence events. Then I think they'll take to the streets and it'll be open season on American troops whenever and wherever they can be targeted.

For the militias, it'll be their Tet 68 moment - a mass armed uprising intended to show the vulnerabilities of American forces, inflict heavy casualties and strike a fatal blow to American popular support for the war and any war hawk candidate.

The militias don't have to win, that's not how this works. The 1968 Tet Offensive was a mass uprising by the Viet Cong insurgency that was a spectacular failure but a victory nonetheless. It failed militarily. The Viet Cong were all but wiped out. However it was an enormous political victory and that's what these insurgency/resistance movements are all about.

Tet shattered American support for the Vietnam war. Americans suddenly believed their war was lost. It was a powerful tide change in public opinion. When support collapsed at home the end for the American effort was inevitable.

Nixon came to office on a pledge to get America out on a "peace with honor" plan. Does that sound familiar? It's what politicians fall back on when there's no other way to get out of a quagmire. It means "withdrawal under the illusion of not having really lost." Remember that because you'll likely see more of it over the next few years.

The Iraqi militias too can rise up to launch their own Tet. They don't have to win on the streets of Baghdad. They just need to win on Main Street, America. It's an opportunity they can't count on ever getting again. In 2004, the American people were still behind Bush's war on terror and were still solidly behind the Iraq war. These past four years have seen a collapse in American support for the Iraq conflict and conditions right now are about as ideal as they can get.

When could this uprising occur? My guess is that the US elections will determine the timing. The militias need to send shockwaves through American voters and leave some time to let that settle into anti-war opinion.

I could see this beginning in July/August and running for, say, two weeks of intense fighting (Hue comes to mind) followed by another six weeks of steady but scattered attacks. I think they would need to have their impact crest around late September to erase all confidence in the surge and shake loose all soft support for the war.

George w. really isn't helping McCain on this. He's determined to push through his long-term basing deal with the Maliki government. That agreement can only inflame resistance sentiment inside Iraq, among both Sunni and Shia. Remember, a key reason the Americans invaded Iraq was to find a new location for the US bases in Saudi Arabia that were causing the Saudi rulers so much trouble. If those bases were unviable in a country under the iron hand rule of the Saudis, how palatable will they be in a country beset by enormous, sectarian conflict, where America is seen as an occupier, with a feeble government and a neighbour like Iran?

So, yep, I think that we may see a hot summer of intense conflict in Iraq, battles that could well determine who takes the White House in November.

I sure don't want to see this happen but, when all these conditions and circumstances come together at this one, brief period, I can't see how it won't.
Posted by The Mound of Sound at 6:59 AM

One of the best analysis I have read on the Iraq issue so far.

Hi LD. Wow, thanks. I've been trying to find out just what Muqtada has been up to lately but it's almost as though he's disappeared except when he surfaces of periodic, brief statements. He's a guy keenly aware of timing and the struggle he faces to grab power in Iraq when the first opportunity arises. This pre-election interval presents some opportunities to the ambitious in Iraq. Watch to see whether the US really pulls many of its soldiers before the year end.