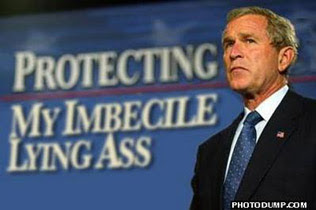 What else was he going to say? The truth? C'mon we're talking George Walker Bush here, the hellspawn of George Herbert Walker Bush and his darling Babs.

So they popped George in some clean undies, a shirt and tie and stood him up before a crowd at the Pentagon to crow "Mission Accomplished All Over Again." From McClatchey Newspapers:

President Bush on Wednesday declared that "the successes we are seeing in Iraq are undeniable" [provided you're well and truly in denial] as he gave a rousing defense of the war on its fifth anniversary before a receptive but not overwhelmingly enthusiastic Pentagon audience.

As the war entered its sixth year, Bush refused to concede any setbacks in the conflict, where nearly 4,000 Americans have been killed and the country has been plunged into sectarian violence. About 158,000 U.S. troops are stationed in Iraq.

Bush said, "my administration understood that America could not retreat in the face of terror. And we knew that if we did not act, the violence that had been consuming Iraq would worsen and spread and could eventually reach genocidal levels."

The 2007 American troop buildup "opened the door to a major strategic victory in the broader war on terror," the president maintained.

He then looked ahead, saying that the goal is to "consolidate the gains we have made and seal the extremists' defeat."

Oh yeah, speaking about undeniable success. Yesterday marked the opening of reconciliation talks in Baghdad. I guess there were a lot of empty chairs. The Americans showed, so did Maliki's representatives. Sadly missing, however, were the Baathists, the Shiite militias and the Sunni insurgency. They chose to give it a pass.

Oh yeah, the other good news. The War Without End on Terror has been going so gosh-darn well that the top White House counterterrorism post was left to sit empty for the past 15-months! I guess George must have picked up on that when one of his aides glanced through the latest Newsweek. That got George going and, today, he announced the appointment of Ken Wainstein to be his new White House-based homeland security adviser.
Posted by The Mound of Sound at 11:15 AM

And life was better with Saddam and his sons raping and killing hundreds of thousands of their own citizens,right?

No, dumbass, but that "get out of jail free" card has a shelf-life and that best before date passed about 3-1/2 years ago. The longer this fiasco goes on, the more irrelevant becomes your lame argument.

Mound, do not get upset just look at facts.

In case of Saddam and his sons they were allegations but never proven.

Since U.S. invasion close to 1 million Iraqis are killed, people homeless, without water and sewerage and food. Violence is many folds higher.

U.S. army soldiers not only raped Iraqi young girls but also killed all their family members to hide any evidence. Now these are not allegations but facts proven by U.S military courts. Now who is worse?

It is a totally illegal war and crimes against humanity.

Hi LD. I don't have any trouble accepting the allegations about the Hussein boys but that clearly doesn't justify the carnage and riot that has swept Iraq since the Americans arrived.

Look at the devastation inflicted on Germany by mid-1945 and then look at the efforts we poured into reconstruction. Berlin certainly wasn't an open sewer with no electricity or water by 1950 and yet that's the fate that's been visited on the Iraq people as their share of Bush's "Undeniable Success."

It was an illegal war and America likewise violated all of its obligations as the subsequent "occupying power" under international law.

In a world of law, Bush, Cheney, Rove, Wolfowitz, Feith, Rumsfeld, Rice, Gonzalez and their supporting cast would all be clapped into irons and led away.

Very true. Neocons theories to justify the war are as horrendous as the war itself.

Bush had every right to remove Saddam.

The question is why the terrorists are doing what their doing.

When you place all the blame on Bush, while ignoring the terrorists, your ignorance is clearly shown.

But then again, you support the actions of Hamas so I am not surprised.

BTW Ledaro, there are plenty of facts regarding Sadddam and his kids raping and killing young girls.

But that was O.K.

It's only when America is involved that the retards come out in the light.

In 1998, Congress passed, and President Bill Clinton signed, the Iraq Liberation Act. It stated, "It should be the policy of the United States to support efforts to remove the regime headed by Saddam Hussein from power in Iraq, and to promote the emergence of a democratic government to replace that regime."

In December 1998, after ordering military action in response to Mr. Hussein's decision to expel the U.N. weapons inspectors, Mr. Clinton said, "Other countries possess weapons of mass destruction and ballistic missiles. With Saddam, there is one big difference: He has used them. ... The international community had little doubt then, and I have no doubt today, that left unchecked, Saddam Hussein will use these terrible weapons again."

While many critics of the war like to portray our intelligence operatives as buffoons or rubber stamps for the Bush administration, they often conveniently ignore the pre-war intelligence reports of nations such as England, France, Russia and Israel. All believed - right up until the day we invaded - that Iraq had weapons of mass destruction. So did Mr. Hussein's own generals.

According to the latest ABC News poll, 55 percent of Iraqis now say their lives are "going well." Last year, that number was 39 percent. Despite the constant drumbeat of criticism, a majority of Americans now see things improving in that war-ravaged nation.

Iraq has yet to truly stand on it's own and another (truly free and certified) election will be required to establish a democratically elected gov't. I also realize that they are not in control of their own military. However, it's pretty clear that they are decades ahead of where the Korean people were in 1955 for example.

Johnathon, you are victim of war propaganda starting with Saddam has WMD and host to Al-Quida. All has proven utter lies. I suppose 1 million Iraqis killed, because of Bush war, do not matter to you. They were just Iraqis in your book.

First of all Johnathon, let's disabuse your mind of some of your fantasies. Bush had no right to invade Iraq. Wars of aggression are illegal. We hanged a bunch of guys at Nuremburg for that very offence. War can only be lawful if authorized by a clear resolution of the UN Security Council - and there was none. Britain knew it and tabled a motion accordingly then sheepishly and guiltily withdrew it when it became obvious it would be defeated at the UNSC.

This war is completely illegal and those who initiated it belong in the docket to face the same charges brought at Nuremburg - and the same fate of those accused before them.

Your next point about terrorists. Their very existance in Iraq is entirely due to America's illegal invasion of that country. There were no connections between Saddam and al-Qaeda, none. They were mutual enemies.

I don't support Hamas but the Palestinian people did in their last election. You might check out the April edition of Vanity Fair which has an expose on how Fatah, having lost that election, chose to become an armed, US proxy to violently overthrow the duly elected Palestinian government.

If anyone is retarded here Johnathon, it would have to be you.

And as for "cut'n paste" Oldschool, I'm just going to ignore you. I'm tired of dealing with your out of date, discredited and inaccurate nonsense.

Good answer, the same kind I would expect from Osama Bin Laden.

Johnathon, 70 % of Americans do not approve of Bush mainly because of Iraq war. Are they all Osama Bin Laden? You sound like a person who is afraid of his own shadow.

Bush's approval rating was 71 percent at the start of the war.

If the Iraqi people and the terrorists would act like human beings, his approval would be even higher.

I'm sure you're old enough to understand that.

Jonhnathon, you're dead wrong. Bush administration lied on the reasons for war, WMD, and lied that it would in Iraq and out because Iraqis would love US troops so much and hated Saddam so much. Public was misled on all these issues and more. That is why his approval rating is at 30%. Even the Senators and Congressmen who voted for the war are saying they were deceived – including some republicans.