The Next President of the United States of America 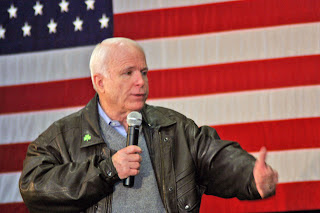 A convincing case for that was made by the TV pundits during last night's primaries coverage. The scenario sees Clinton and Obama battle it out in an increasingly bitter contest that alienates a lot of the eventual loser's followers and disenchants independents.

McCain is already targeting the middle and the independents. He goes for a running mate who's a real "fire'n brimstone" type to appease the evangelical Republican base and uses the remaining nine months to wage a powerful campaign of moderation.

Clinton and Obama grind each other down until just about nobody wants either of them any more. Clinton prevails, emerging to find herself with the "Over 60" Democrats and having to share what were blue collar Dems with McCain. The youth vote and "Latte" crowd stay home and sulk.

Republicans combine with independents and Dems who've shown they won't vote for Hillary no matter what, costing the Democrats their tenuous hold on Congress to boot.

I have to agree with you Mound, the longer the democratic nomination process lasts, the better McCain's chances are of upsetting the democratic frontrunner.

Yeah, it's too bad. Oh well, at least it's not Giuliani or Romney.

Yeah, I guess the Republicans had to nominate someone! At least they chose the so-called "left-leaning one". LOL

From the way the economy is headed, maybe it's just as well if the GOP wins. It might do them some good to wear the coming Depression. Grampa Munster could end up being the next Herbert Hoover.

I understand your thinking RT. I think it was Russert who pointed out that Americans have never elected a president from the incumbent party in the midst of a recession. Maybe there's hope for the Dems yet but I wouldn' count on it.