Making a Silk Purse Out of an Afghan Goat's Ear 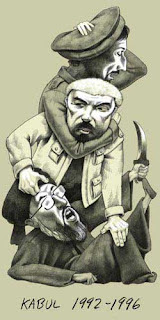 I was lucky enough to catch part of an interview with Gwynne Dyer aired on BC's Knowledge Network last night. The interview had been taped sometime last fall.

Dyer had some interesting observations on Afghanistan. He noted that the Afghans had "seen off" four, foreign incursions over the past 150-years - three British invasions and one Soviet - and said we're number five even if we think we're "special."

As for democracy and a viable state, Dyer said that Afghanistan has never really functioned as a state, merely an assembly of suspicious, rival ethnic groups that, between wars, sometimes manage to strike ceasefire deals that last for up to two to three decades. Then they go back at it until they get exhausted and decide what comes next. That's where they were when we stepped in.

Right now we've got the Uzbeks, Tajiks, Hazara and Turkmen lined up on our side against the largest ethnic group, the Pashtun, on the other. Warlords are in power in Kabul because it's a tribal society, a genuine herd of cats.

We have no plans to get rid of warlord rule and, unless and until we do just that, the nation will remain a patchwork of tribalism. In other words, we can win but only if we fight - and defeat - every ethnic group in the country. And what do you think are the odds of that?

The only way "the mission" to Afghanistan makes the slightest sense is from a position of wilful blindness and profound ignorance. You have to really, really, really dumb yourself down so that you can ignore all the obvious contradictions and manifest obstacles for which we're not even venturing solutions. We're talking John Manley dumb here.

I've spent hour upon hour searching out information on Afghanistan's warlords, a subject that goes unnoticed and unmentioned by Canadian reporters even thought it is the pivotal reality to Afghanistan's future. People, both present and past, like Dostum, Dadullah, Massoud, Gul Agha, Fahim, Haq, Mazari, Shirzai and Hekmatyar - not to mention, of course, Karzai. Even the president is a warlord. They all are. And, as pointed out by Chatham House in its latest review of Afghanistan's pitfalls, there exists a powerful "nexus" - yes, an actual, living, breathing connection - between these guys and the insurgency and the country's record-breaking opium trade. They're against the Taliban insurgency because (a) we're doing the fighting and (b) they choose to be for now.

Ah, but what about the Afghan National Army? Okay, what about it? In a nation whose very foundations are based on ethnic rivalry and feudal tribalism, how long do you think the Afghan National Army will last after the warlords each call their own factions home? These soldiers don't have a bond with a country that doesn't exist. Their bond is with their respective tribes and those tribes are directly ruled, not by Kabul, but by their warlords. Every private and corporal's families are subject to the whims of their tribe's warlord.

We have an Alice in Wonderland mentality about this war and that explains why, six years down the road, we're still hanging about swatting at flies. C'mon - we're talking about the power and glory of the Western world here on one side and a gang of medieval peasants on the other - and we're not winning! And our leaders - military and political - ran out of ideas years ago. They're on "stay the course" cruise control now. The best idea they can come up with is an extra thousand soldiers for Kandahar.

At least we've finally shed our sophomoric notions of bringing democracy and human rights to Afghanistan. Psst - here's a secret - we were never serious about that anyway.

The key to getting out of this cesspit is to find a way to drive a wedge between the Taliban and al-Qaeda. We've made that task vastly more difficult, Herculean even, by our foolishness of the past six years, but if we don't find a way to make it happen our sole remaining choice will be to leave, defeated. We need to look at the Taliban, cleansed of al-Qaeda affiliation, as barely distinguishable from all the other fundamentalist nutjobs we allow to rule outside the Pashtun territories.

The Taliban need to be re-integrated into Afghan affairs but we can't do that. These deals are negotiated and brokered among warlords, not with outsiders, particularly not infidel outsiders. The role we need to play is to figure out what it will take for the Taliban to cut al-Qaeda loose and then make that happen. Here's a hint - bombs aren't going to do it. It's going to take honey, lots of it.

Afghan elections are coming up and there's word that Washington is going to try to shift their boy, Khalizad, into Karzai's chair. Let's all hope - pray if you can - that doesn't happen.
Image credit: http://www.warlordsofafghanistan.com/ . Where you can buy a lovely set of coasters bearing the images of each of these charming fellows. If you're looking for truly informative sources on Afghanistan, let me know and I'll post them.
Posted by The Mound of Sound at 8:08 AM

Very interesting analysis as usual. However, driving a wedge between Taliban and Al-Quida may be impossible now after attacking them for last seven years. It would have been possible soon after 9/11. Now who will trust Bush, Harper or whosoever replaces them.

By the way Al-Quida and Taliban were freedom fighters, supported and funded by U.S and other Western nations, when former U.S.S.R invaded Afghanistan. Now these freedom fighters are terrorists. Go figure

There's no question it's going to be tough to isolate the Taliban from al-Qaeda after all these years of driving them into each others' arms. That said, it has to be done. We can't do it. It has to be a deal among the warlords. What we can do is come up with whatever it takes to sweeten their deal enough to make it happen.

The Taliban weren't involved in the anti-Soviet days. They came into existence afterward as a religious students' movement that stepped into the post-Soviet power vacuum. I think that's what set them at odds with the northern warlords.

A big part of the continuing conflict is that there still is a big power vacuum among the Pashtun. They lack a stable, warlord regime of their own and we're only making it worse by killing villagers while we swat away at the Taliban.

We've overlooked the southern vacuum and, in the process, allowed the Taliban to maintain their claim to being the "home team."

Thank you. I stand corrected on Taliban. I was thinking of Islamic militants besides Al-Quida who were fighting Soviets.