Hurricane Hillary - the Democrats' Own Katrina 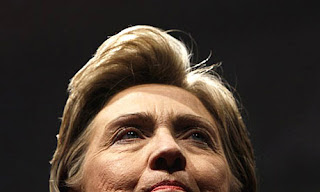 The best thing that John McCain has going for him is Hillary Clinton. So long as she's in the race for the Democratic Party's nomination his popularity soars. By the time November has come and gone the toughest opponent McCain may have faced in his march to the White House could be Mike Huckabee.

"The door is closing. Night is coming. The end, however, is not near.

Last week, an important Clinton adviser told Jim VandeHei and Mike Allen (also of Politico) that Clinton had no more than a 10 percent chance of getting the nomination. Now, she's probably down to a 5 percent chance.

Let's take a look at what she's going to put her party through for the sake of that 5 percent chance: The Democratic Party is probably going to have to endure another three months of daily sniping.

For three more months (maybe more!) the campaign will proceed along in its Verdun-like pattern. There will be a steady rifle fire of character assassination from the underlings, interrupted by the occasional firestorm of artillery when the contest touches upon race, gender or patriotism. The policy debates between the two have been long exhausted, so the only way to get the public really engaged is by poking some raw national wound.

For the sake of that 5 percent, this will be the sourest spring.

About a fifth of Clinton and Obama supporters now say they wouldn't vote for the other candidate in the general election. Meanwhile, on the other side, voters get an unobstructed view of the Republican nominee. John McCain's approval ratings have soared 11 points. He is now viewed positively by 67 percent of Americans. A month ago, McCain was losing to Obama among independents by double digits in a general election matchup. Now McCain has a lead among this group.

For three more months, Clinton is likely to hurt Obama even more against McCain, without hurting him against herself. And all this is happening so she can preserve that 5 percent chance.

When you step back and think about it, she is amazing. She possesses the audacity of hopelessness.

Does Clinton privately believe that Obama is so incompetent that only she can deliver the policies they both support?

Is she simply selfish, and willing to put her party through agony for the sake of her slender chance?

The better answer is that Clinton's long rear-guard action is the logical extension of her relentlessly political life.

For nearly 20 years, she has been encased in the apparatus of political celebrity. Look at her schedule as first lady and ever since. Think of the thousands of staged events, the tens of thousands of times she has pretended to be delighted to see someone she doesn't know, the hundreds of thousands of times she has recited empty clichés and exhortatory banalities, the millions of photos she has posed for in which she is supposed to appear empathetic or tough, the billions of politically opportune half-truths that have bounced around her head.

No wonder the Clinton campaign feels impersonal. It's like a machine for the production of politics. It plows ahead from event to event following its own iron logic."
Posted by The Mound of Sound at 7:18 PM