Was the Manley Report a Sham? 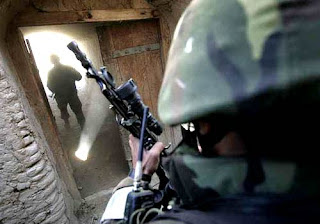 The key recommendation of the Manley panel report on Afghanistan finally makes sense.

The notion of drawing a line in the sand over a demand that NATO provide an extra 1,000 soldiers to support Canadian forces in Kandahar always seemed curious. Why 1,000? It seemed like a political number to come up with in a report that was supposed to be an assessment of the mission, not the politics behind the mission. Why not something meaningful, say 5,000 or more?

Well, if Denis Coderre is right, one thousand was an entirely political number and the Manley Report was all about the politics behind the mission and nothing more. In effect, Manley played a willing shill for Stephen Harper.

The Liberal defence critic says the extra 1,000 troops was already arranged before the Manley report was revealed. From the Globe & Mail:

"What I have learned is that, even before the Manley report, there was already a deal that Americans, if they don't have anybody [to assist the Canadians], will step up to the plate and provide that 1,000 soldiers," said Mr. Coderre.

Steven Staples, president of the Rideau Institute, a policy organization that has been critical of Afghan mission, holds similar views.

"The additional troops will have more political than military significance. With the 1,000 troops, French President Sarkozy scores points with U.S. President Bush, President Bush claims victory at NATO next month, and [Prime Minister] Stephen Harper can keep Canada in the war for another three years," Mr. Staples said in an e-mail yesterday.

"What is most concerning is that Canada, surrounded by 1,000 additional U.S. troops, will become increasingly implicated with U.S. forces and their aggressive war-fighting approach to the conflict."

In this context the Manley report finally makes sense. John Manley's job was to be Stephen Harper's water boy - and he delivered.
Posted by The Mound of Sound at 6:51 AM

If Liberal Party member John Manley was Harpers waterboy, what does that make the whole Liberal party for voting for the extension by Harper?

Dennis Coderre ha,ha, ya call me the next time this clown see's UFO's or sues another Captin of Team Canada.

Does this mean that the libs are 'embedded' with the cons? Just wondering....

Does this mean that the libs are 'embedded' with the cons? Just wondering....

Oh please start a smear campaign against Manley, Wallin and the rest of the panel. Call them all Con hacks and accuse them of undermining the Libs. These people are well respected by most Canadians, I dare the Libs to trash them publically.

A smear campaign? I don't think so. It's hardly smearing anyone to point out the obvious - that this report is about the politics behind the mission, not the mission itself. A report that seems tailored to conform to an existing but unannounced state of affairs has to be questioned. When it contains so little military efficacy, that's doubly true.
Do yourself a favour. Google FM 3-24 and read it. It's the latest US counterinsurgency field manual co-authored by Petraeus himself. Read it and you'll see how disingenuous is the offerings of Manley, Wallin et al. Read it and then we can talk like intelligent, informed people.

Oldschool, if you want to use a comment as a vehicle for insults this isn't the place for you. I'm not putting up with your nonsense any longer. Binned.