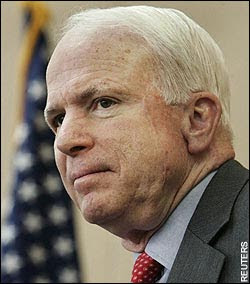 I used to like John McCain, especially back in 2000 when he showed such courage and decency in his campaign against George w. Bush for the Republican presidential nomination.

I liked the John McCain who stood up and denounced Jerry Falwell and Pat Robertson as "agents of intolerism."

I liked the John McCain who took on Rumsfeld and Cheney and Bush for their absolute bungling of the Iraq war.

I liked the John McCain who, in 2001, stood his ground and opposed the Bush/Cheney tax cuts for the rich, proclaiming, "I cannot in good conscience support a tax cut in which so many of the benefits go to the most fortunate among us, at the expense of middle-class Americans who most need tax relief."

If I'd had the chance I could have voted for that John McCain but this is 2008 and that John McCain is dead. He's been replaced by the new John McCain, stripped clean of all those principles, all that courage and that good conscience so that he can weasel through that small hole that leads to a Republican White House.

The new John McCain is a willing, even happy shill for the extreme, religious right; for America's "most fortunate"; for those who want the Iraq war to go on forever and ever amen. He appears as convocation speaker at Bob Jones university, embraces nutjob Pastor John Hagee, pledges to make permanent the tax cuts for the rich that once so offended his good conscience, and says he'll continue an unwinnable war until victory is his.

It's becoming impossible to tell where George w. Bush leaves off and John McCain picks up.
Posted by The Mound of Sound at 8:59 AM

"It's becoming impossible to tell where George w. Bush leaves off and John McCain picks up."

Well, if you believe anything he says in his speeches, Mr. McCain still has 'friends'.