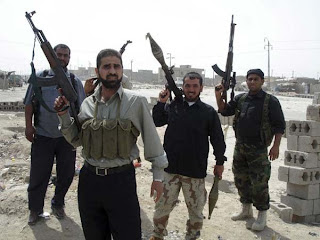 Muqtada al Sadr got a step closer to taking power in Iraq this past week.

Nouri al-Maliki gambled everything, including his own reputation, in personally leading the Iraq army's assault to clear Basra, promising a "decisive and final battle," only to see his numerical and firepower superiority go up in smoke as Iraqi soldiers were repeatedly mauled and ground down by Sadr's irregulars, the Mahdi Army.

The balance of power has shifted. A number of factors have come into play. One is that Sadr's forces have shown they can and will resist the government forces, even in the face of American air support. The Mahdi Army has shown that Sadr cannot be eliminated militarily. Baghdad is going to have to accommodate him. The fighting showed that the success of the "surge" was more Sadr's doing than that of Bush or Petraeus. Maliki, already seen as politically weak, has now shown himself as militarily weak also.

This wasn't just between rival Shia factions. The Sunni were watching closely, so were the Kurds. Now they've seen just what they can expect to be up against if they get into a shooting match with Baghdad and, if anything, they're bound to be (to use Bush's favourite word) "emboldened." Maliki may have just scuppered any hopes Maliki and Bush had of meaningful compromises to forge a united Iraq.

So Maliki lost this opening game but there are several more to be played. Iraq has provincial elections coming up in October and then there's the World Series in Washington in November. Every group in Iraq must be planning how they'll be spending the long, hot summer that's just around the corner.

Sadr acted brilliantly in calling off his militias when he did. They had already achieved their political objectives and engaging in a war of attritition at this point could have left the Mahdi Army too weak to exploit whatever opportunities may come along over the next six months.

What must be running through Maliki's mind? Possibly visions of the end.
Posted by The Mound of Sound at 9:25 AM

May be in Nouri al-Maliki and George W. Bush's minds they are playing Golf, hence they are winning ;)