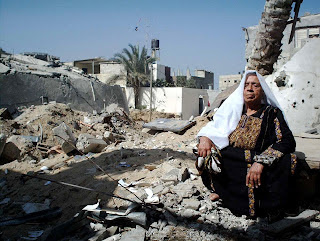 George Bush doesn't get it, neither does Olmert. Hamas is the duly elected governing party of the Palestinian people. It's not Fatah and Abbas. They lost the election, Hamas won.

Hamas isn't a very likable outfit. It is, however, the chosen voice of a radicalized population. If we could ever get past idiots like Bush and Olmert, we might also find that Hamas could, possibly, be the key to easing the radical nature of the Palestinian people.

Bush ought to just back out of this thing anyway. He's been revealed as a blatant manipulator who co-opted Abbas against the will of the Palestinian people, sparking a bloody civil war in the result.

Somebody else needs to step in - and I mean step in with troops. It has to be a coalition of countries that can still be seen, on both sides, as unbiased. That isn't going to be easy, both sides embracing the delusional "you're either with me or against me" philosophy that's worked so well for George w. Bush. Since we probably won't satisfy either of them, the UN will have to ensure that it sets the bar high and satisfies itself.

Next step. Option A. Back to the pre-1967 borders and I mean back. One big 5-year plan to remove all Israeli settlement beyond its pre-1967 borders, everything. Out, gone. Jerusalem either a free city or partitioned. Full compensation for Arabs forced out post 1949 which can be offset by the value of Israeli-owned assets left behind in Palestinian territory. Agreement to guarantee sharing of freshwater resources situated in the West Bank. Full recognition of Israel and full trade rights with the Arab nations. Aid to Israel to help in accommodating relocated settlers. Then, a 10-mile wide demilitarized zone along the Israeli-Palestinian borders.

Option B. A one-state solution. Full citizenship for every Palestinian living within the combined Israel-Palestinian state. Full voting rights, human rights and all other political freedoms.

Israel gets to choose.

Option A would be the only practical solution for Israel. The single state option wouldn't work demographically. The Palestinians would soon gain an ethnic majority that would translate into electoral control. To retain Jewish political control, Palestinians would have to be disenfranchised in a form of apartheid. Unacceptable, flat out.

Give the Palestinian people something to work for, something to build, instead of always leaving them with just something to fight for. We've had that experiment for half a century and have seen how well it's worked. You want to eliminate radicalism? That's where you begin. Give them their own country, give them a Marshall Plan that floods them with aid to build that place into something worth having as quickly as possible, and you'll have not just a roadmap but the road itself.

You can't get this started until you acknowledge the democratically elected leaders of the Palestinians, no matter how distasteful you may find that. If you want to see the face of the Palestinian leadership, don't look at them, look a decade or two beyond them and then start creating the opportunity for that future, progressive leadership to emerge and take hold.

Or not. You can always go back and ship over more boatloads of clusterbombs and attack jets because, surely, you just need a few more of them to solve the problem, just a few more.
Posted by The Mound of Sound at 8:36 AM