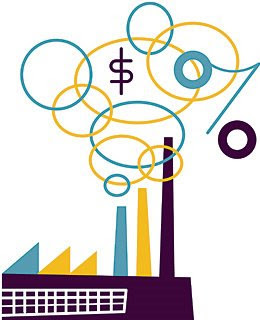 It's an idea I've endorsed for some time - carbon tariffs on imports. Work out the carbon footprint associated with an import and then levy a tariff on it as the product arrives at our docks.

By fixing the tariff to the product, it becomes possible to circumvent the principal arguments that block progress on a meaningful and effective plan to combat global greenhouse gas emissions.

The more populous countries, China and India, have a sound argument that because their per capita emissions are just a fraction of a citizen of the West, they should get a pass until we lower our per capita emissions. This, of course, ignores the fact that they're largely poor, over populated, agrarian societies which gives them an enormous advantage on the per capita scale.

The smaller, Western countries also have a sound argument when they point to China having already emerged to become the top GHG emitter. Leaving aside issues of population, that's a powerful argument but it's no more powerful than the per capita argument so - stalemate.

Carbon tariffs levied on production cut through both arguments and break the deadlock. Those tariffs, however, must be applied to imports as well as domestic production. Then fair is fair.

CIBC World Markets has released a report endorsing carbon tariffs and noting they could even restore North America's manufacturing sector. From the Toronto Star:

"It becomes absurdly quixotic to ban coal plants in North America while at the same time China's got 570 coal plants slated to go into production between now and 2012, 30 plants between now and the Olympics," CIBC economist Jeff Rubin said.
"We're moving in opposite directions."

With some advanced countries enacting carbon taxes, carbon trading systems and other measures to lower emissions, CIBC believes the growing pollution from developing countries will provoke penalties against their exports.

That would benefit the environment, and will also bring certain jobs back to North America, since carbon emission taxes and high oil prices would offset the benefit of cheap labour, Rubin says.

"Chinese goods will have to pay for the carbon that they emitted and they'll pay for that when they enter our market place by paying that tariff," Rubin said in an interview.

"Once we impose the tariff on Chinese goods, some of those industries will be coming home, because . . . energy and carbon efficiency is going to matter more than labour costs."

We still have an edge on clean technology and we do the country no good service by failing to use that edge to our own betterment. We need to see carbon taxes not as something that will endanger our economy but something that can stimulate and restore our economy.
Posted by The Mound of Sound at 9:18 AM

Whooee! Although Dion made some noises last week about a "price for carbon," only one federal political party has openly advocated a carbon tax: the Greens.

Even CEO's of multinational corporations have come out in favour of taxing emissions; yet, our lameass wimpy LPC, CPC and NDP politicians are too scared to try to explain to Canadians why we need such an instrument.

The Green policy is to shift taxation away from income and on to emissions. "Tax what you burn - not what you earn."

It's great to see mainstream financial institutions and business leaders starting to come around to Green Party ideas.

Harper and his allies have done everything in their power to further the notion that cleaning up our environment will bankrupt our economy. The opposite is actually true. Failing to clean up will be far more costly. Failure to be early adopters ensures that Canada will be left in the dust by more forward-thinking nations.

JB
(reposted due to dumbass typo)

Good points, JB. People really need to think this one through. Tariffs were sold as utterly bad during the Reagan/Mulroney free trade campaign that led to NAFTA.

Tariff relief is a cornerstone of globalization which seeks to move capital and means of production to the developing world without sacrificing essential access to affluent, Western markets. To achieve this the free-traders had to equate tariffs in the public's mind as protectionist shackles on productivity and nothing more.

The social and political utility of tariffs went unmentioned and yet, now, that's coming back into the debate and it's long overdue.

Determining the carbon footprint of every item that crosses our border sounds like an extraordinarily difficult job.

Who's to know if the electricity to make each item's sundry components was generated through coal plants, hydro-electric dams, or solar panels? It's not like you can take the thing apart and measure this.

We would have little choice but take the importers word for the carbon footprint of each item, hardly a practical situation.

Yer right, Rabbit, it would be tough. In the UK, they are starting to label food items with carbon footprint rating logos. They're apparently able to determine this figure on, so far, a small number of products.

The idea is not without some unintended consequences, too. Kenyan farmers who export to the EU and UK are worried that, although they themselves use environmentally friendly methods, the transportation of their products to Europe boosts the carbon footprint and threatens their livelihood.

We already have international standards and quality control mechanisms like ISO 9000. These mechanisms ensure that we don't simply take a manufacturer's word for it that they've produced their product according to specifications. Every supplier to the automotive industry is already required to be ISO compliant. Environmental components are already being added to ISO 9001 compliance requirements.

Hi Rabbit: I don't think it'll be easy to work out a system of tariffs but I don't think that it will be too difficult either. We would have to await a study on the tariff options to find one that would work for both imports and domestic production.

I once sat in on a speech by Liberal Environment critic, David McGuinty, and he described a "carbon saving plan" as an alternative to a Carbon tax. The way he explained it was that rather than pay a tax that the government could spend as they please, the government would collet a certain amount of money based on the emissions produced. This money would go into an account, from which the company could withdraw the funds in order to invest in reducing their emissions (naturally the government would have to regulate standards). If, after a period of five years, the companies had not withdrawn their money from these accounts, the federal government would get the money and invest it toward green technologies.

Also, Mound, I finally got around to writing that post on my blog about whether or not there is sufficient evidence to obtain a conviction if ever Harper were charged for his role in the Cadman affair. I'd appreciate it if I could get a second opinion from someone with a legal background. (Warning, it's a long post!)