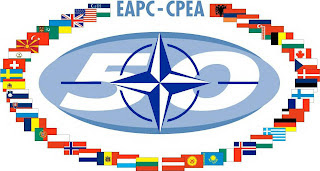 The United States has been ranting lately about the very future of the NATO alliance hinging on the willingness of its European members to send more troops to fight America's castoff war in Afghanistan.

Washington may have been trying to shake up the European states but it's a policy that carries potential risks to the US that may be even more threatening.

America posits itself as "Leader of the Free World," a fairly grandiose but shallow, even tenuous claim. What is the Free World if not the Western world?

Since the end of WWII, America's prestige has been framed as the leader of the developed world. It was Washington's ability to lead Europe and harness their combined industrial engines and military might that elevated it to leadership globally.

Without a NATO to lead, America is reduced to a powerhouse dependent on ad hoc coalitions of states that typically need to be bribed or cajoled into joining and that flit in and out as it suits their interests. Bush, himself, on trying to gather a meaningful alliance to legitimize his conquest of Iraq spoke of the future as one to be shaped by "coalitions of the willing."

These coalitions, however convenient, lack precisely what America needs most - permanence and constancy. They're "one off" affairs that can rapidly turn into embarrassments as once true blue underlings get bored or are driven out in elections at home. That ain't no way to lead the world.

Without NATO, what remains save for the United Nations, a body increasingly hostile and suspicious of the United States? The UN is also the place where America cannot avoid looking into the faces of its future economic rivals - China and India, Russia and Brazil - and their demands for recognition and power sharing.

The European Union itself has emerged to rival the United States in population and combined GDP but NATO isn't structured as a US/EU partnership. Within NATO, America remains very much first among notional equals. Within NATO America can still leverage its considerable strengths.

It is no fluke that the United States appears much more worried about the potential demise of NATO than its European partners. Their 21st century reality is much different than the past, more divergent from America's.

In America's heyday, Europe was delineated by a concrete wall and barbed wire. To the East lay nothing but threats. The Soviet Union and its vast thousands of tanks stood poised to smash through the Fulga Gap and swallow the West. The wall is finally gone and the barbed wire and tanks are gone too. Europe has swelled to Russia itself and now has become dependent upon Russia for essentials such as natural gas.

Europe sees itself today more connected to Russia than at any time since the First World War and Old Europe finds itself increasingly at odds with New Europe and the United States over how it will deal with Russia. Washington is intent on driving NATO straight to the Russian borders by inducting Georgia and the Ukraine even as it negotiates to plant anti-missile batteries in Poland and the Czech Republic, virtually on Russia's doorstep.

American belligerence is fueling an arms race with Russia that is directly contrary, even harmful to Europe's interests. European leaders are more or less playing nice at the moment, hoping that November will bring a level of maturity and vision to the White House not seen since 2000.

NATO still has an important role to play in the futures of both the US and Europe but the next American president will have some real fence-mending to do. That'll mean toning down American unilateralism and exceptionalism, giving Europe a greater say in the leadership of the Alliance and no longer treating NATO as America's Foreign Legion.
The stresses that threaten the Alliance are more American than European. And, if NATO does fall apart, America stands to lose more than anyone else.
Posted by The Mound of Sound at 5:46 AM