Eyeing Each Other Over Open Sights 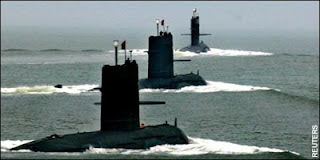 The great military rivalry of the 21st century is bound to be between China and the United States.
Gwynne Dyer, in his latest book, contends that a key reason for America's invasion of Iraq was to achieve military control over the Persian Gulf to thwart China's influence in the Middle East and be in a position to cripple its access to the region's oil should that be necessary.

The Chinese government today announced an increase of 18% in the nation's defence budget this year. The Pentagon figures China's disclosed budget is but half to perhaps just one third of its actual spending which would still leave China spending well less than a third of the US defence budget. That said, the Chinese appear to be getting more bank for their buck out of their defence appropriations, spending that Chinese analyst Chen Zhou explained and defended in an interview in today's Der Spiegel:

Chen: If we grow economically, we must also strengthen our military. We must protect our sovereignty, our unity and the country's security. Historically our military consisted primarily of land-based forces that were meant to protect our homeland. Since 1980, we have also been arming ourselves for other local conflicts and wars. Please do not forget the activities of the separatists in Taiwan ...

SPIEGEL: ... who you have threatened with military force, should Taiwan declare its independence.

Chen: We will defend our sovereignty with all means. If, in fact, we are forced to stop a secession attempt with military means, our navy and air force are not yet effective enough. In that sort of a conflict, we must be superior in the water and in the air, at least locally.

SPIEGEL: Does this mean that you plan to measure up militarily to Taiwan's most important ally, the United States?
Chen: It is not necessary for China to challenge America's position of supremacy. Our concern is to prevent an intervention by the Americans during a crisis in the Taiwan Strait. Chinese on both sides of the Taiwan Strait, and no one else, should resolve the Taiwan issue. Whether this is done peacefully or militarily is purely a matter for the Chinese.

SPIEGEL: How does Beijing intend to prevent the Americans from intervening?

Chen: Both sides hope to preserve peace and stability in the Taiwan Strait. China wants to develop economically. We don't want a war, not even a crisis. But to ensure that this is the case, we must be militarily prepared.

Chen: Exactly. Deterrence is one of our strategies. Our goal is to preserve peace and stability on the Taiwan Strait. In the past, we did not pay sufficient attention to studies about deterrence. Now we are very interested in the effects of deterrence. We must be able to prevent, resolve and control crises. Crisis management is our top priority. We can resolve a crisis if we are in a position to deter.

SPIEGEL: You have demonstrated that you are able to give the Americans a shock. For example, one of your submarines surfaced directly next to the aircraft carrier "Kitty Hawk" without having been previously detected.

Chen: That was a coincidence. Our navy is still very small compared with the US Navy. Our range of operation has just reached the so-called first island chains, that is, Japan, Taiwan and the Philippines.

SPIEGEL: Do you plan to venture farther afield in the future?

Chen: Traditionally China has seen itself as a land power. In our recent history, foreign powers were able to invade us because we had no navy. Now we want to defend ourselves at sea. To more effectively protect our national interests, we will develop our capability to operate on the high seas. Our navy will travel farther afield. But our goal is always defense. We are not an offensive power.

The US/China/Soviet/Indian arms race continues apace. It seems as though we're about to enter a brand new Cold War.
Posted by The Mound of Sound at 1:02 PM